(Clearwisdom.net) The "Truthfulness-Compassion-Forbearance" International Painting and Photographic Exhibition sponsored by the Japanese Falun Dafa Association was held for four days, from November 29 to December 2, 2005, in Funabori, Edogawa-ku, Tokyo. A former member of the Japanese Congress, as well as council members from Tokyo and Edogawa-ku, came in person to offer their congratulations and cut the ribbon at the opening ceremony.

Former Senator Hirosato Nakatsugawa made the first speech. He said, "Falun Gong is good, and it is well-received around the world. Today when I came to see the art and photo exhibitions, I once again personally witnessed the brutality of the Chinese Communist Party's persecution of Falun Gong." He explained that a practitioner had given him Falun Gong materials in front of the Japanese Congress three years ago. He gradually began to understand Falun Gong through frequent contact with practitioners involved in rescuing a Japanese citizen's wife, Yoko Kaneko, who was detained and sentenced to one and a half years of forced labor by former president Jiang Zemin's Chinese Communist regime. Last year in this same place, Mr. Nakatsugawa cut the ribbon at the opening ceremony for an exhibition of works of famous Chinese painters and calligraphers. He hoped that Falun Gong practitioners would be holding future meaningful exhibitions in similar distinguished locations, to introduce the wonderfulness of Falun Gong to more people. 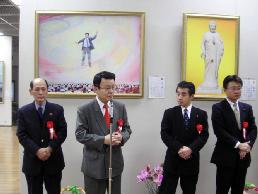 Council members from Tokyo and Edogawa-ku also made speeches. They offered their congratulations to the art exhibition and expressed their concern about the Chinese Communist Party's (CCP) persecution of human rights. They were shocked at the tragic scenes of Falun Gong practitioners suffering tortures that were portrayed in the exhibited works. They indicated that we should help these innocent people be free from the torture and abuse.

A representative of the Japanese Falun Dafa Association said that, living in Japan's peaceful environment, it's hard to imagine that the persecution is still going on in China. "These works were all created by Falun Gong cultivators," he said. "Viewing the 'Truthfulness-Compassion-Forbearance' art exhibition inspires one and purifies one's heart. We will continue to extensively publicize the exhibition to the Japanese community."

Falun Gong practitioners presented Zhuan Falun and Falun Gong introductory materials to the guests who came to offer their congratulations and cut the ribbon. 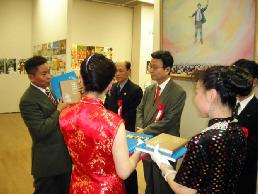 One council member told the reporter that it was the first time he had ever received a Falun Gong flyer. Another council member highly recommended to him the Nine Commentaries on the Communist Party. He said that he believed that one must read the Nine Commentaries to learn about China and to understand the true nature of the Chinese Communist Party. 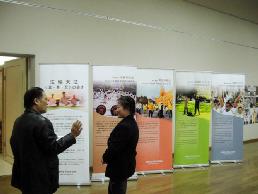 Introducing Falun Gong to a visitor

Some visitors who looked at the exhibition immediately learned the five sets of exercises from practitioners at the exhibition hall. They also left their contact information and asked for contact telephone numbers of local practice sites. Several other visitors who saw the exhibition immediately asked for the book, Zhuan Falun in Japanese. Through this painting exhibition, more visitors learned about the wonderfulness of Falun Dafa and the brutal persecution that Falun Gong practitioners are suffering in China. They all hoped that the persecution would end soon. They also hoped that China would have human rights and freedom of belief just like in Japan.

A Chinese person wrote in the message book: "One of my relatives practices Falun Gong in China. She is a very upright and kind person, but she has suffered inhumane persecution for persisting in her belief in 'Truthfulness-Compassion-Forbearance.' I'm very appreciative for being able to see such a beautiful painting exhibition."

The "Truthfulness-Compassion-Forbearance" International Art Exhibition has been exhibited in several places in Japan. The artists, all of whom practice Falun Gong, hope through their works to display the wonderfulness of Falun Gong and Falun Gong practitioners' uncompromising spirit under the persecution. The practitioners have been clarifying the truth, offering salvation to people with great compassion and tolerance, and exposing the fact that Jiang Zemin's regime has colluded with the Communist Party to brutally persecute Falun Gong.

December 4-10, 2005, marks the 57th annual Human Rights Week in Japan. The "Truthfulness-Compassion-Forbearance" International Painting and Photo Exhibition encourages people to pay more attention to what is happening in their neighboring country.

“New Zealand: Participating in the Christmas Parade in Dunedin (Photos)”