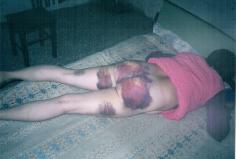 Ms. Liu Jizhi is from Xituan Village, Dongchengfang Town, Zhuozhou City, Hebei Province. Her husband's name is Wei Xiliang (48 years old). They have two daughters. The older one is 19 years old and the younger one is 17 years old, both of whom are students. Before Ms. Liu Jizhi started practicing Falun Gong in 1999, she suffered from several types of illness. She was particularly tormented by lumbar disc protrusion. Since she started practicing Falun Gong, she has become a very healthy and moral person and does not need to see doctors anymore. Although they are not well off, they are very happy together and living their lives with content. Since the CCP started its ruthless persecution against Falun Gong, the police started to harass Ms. Liu and her family at her home. Before each "politically sensitive day," the police would take her to the local government's complex. The police have been repeatedly extorting money from her in the name of fine even to this day. This time, before the rape, the police shouted at her, "If you dare to practice Falun Gong again, I will keep collecting fines until you go bankrupt!"

Around 8:00 p.m., November 24, 2005, while Ms. Liu Jizhi was alone at home with doors locked during her husband's absence, six to seven policemen climbed the wall and broke into her home. They pressed her to the ground while they ransacked her home and left nothing unturned. The police confiscated her husband's notebooks, Falun Gong exercise music tape and an audiocassette player with an English cassette. In the dim light, Ms. Liu could tell that they were wearing police uniforms, but they failed to comply with the law for they did not show Ms. Liu their police identification or any search warrant. That night, Ms. Liu was brought to the village's brigade, where she was transferred to the police van and sent to the police station.

After years of persistent persecution since July 20, 1999, the local police seem to have come accustomed to hating and torturing Falun Gong practitioners. At Dongchengfang Town Police Station in Zhuozhou City, Hebei Province, the police started their so-called "interrogation." They demanded, "How many people are practicing Falun Gong in your village?" Ms. Liu replied, "I don't know." The police immediately jumped on Mr. Liu and brutally beat her. They also made her squat with her arms stretched out in front of her chest. Next they began to beat her with stun batons and rubber clubs. Then the police forced her to stand up with her knees slightly bent as shown in the top middle photograph and kicked her from behind, causing her to collapse to the ground. After repeated torture and beating in this manner, Ms. Liu's hips, thighs and many areas on her body were severely bruised and injured. A policeman even groped her body in a lewd manner and told her obscenely, "Do you think I am being thuggish?"

Around 2:00 p.m., November 25, 2005, a policeman named He Xuejian took Ms. Liu to a room with two beds in it. A very tanned policeman in his early 30's with the nickname Dajun was laying on one of the beds. There was another policeman in his 40's surnamed Wang in the room. He Xuejian savagely beat her as soon as they entered the room. Next he pressed her against a bed and started groping her breasts. Then he lifted her shirt up and shocked her breasts with a stun baton. While watching the sparks from the stun baton, He Xuejian repeatedly commented, "This is fun! This is fun!" The policeman surnamed Wang watched and said fiercely, "Beat her up! Beat her up good!" Then he left the room.

Despite Ms. Liu's protest and struggle, He Xuejian stripped off her shirt and sat on her stomach. Then he began to poke at her genitals with his finger. Then he switched to another position in order to remove her pants. During the struggle, Ms. Liu pleaded, "I am thinking for your own good--don't do this to me! You are a policeman! You must not commit such a crime! This is totally wrong! You are a young man! I am an old woman. Please spare me." He Xuejian ignored her plea and took out his penis and penetrated her. During the rape, He Xuejian repeatedly slapped her face and choked her neck.

Feeling desperate, Ms. Liu thought of killing herself, but almost immediately she heard a voice in her head, "It is a sin to commit suicide!" Then she shouted out loud for help with all the strength she had left. However, given her physical condition at the time, no one outside of the room could hear her desperate call for help: "Help me! Please help me!"

Afterwards, He Xuejian put on his pants and made obscene and lewd comments, looking very pleased and satisfied. Ms. Liu burst into tears. She cried and sobbed. She left the room and told other Falun Gong practitioners, "He has done a terrible thing! He has done a terrible thing! You must be careful!" Then He Xuejian told another Falun Gong practitioner Ms. Han Yuzhi to enter the room and raped her.

During the two consecutive rapes, the young policeman nicknamed Dajun did nothing. He turned a few times on the bed. Then he watched He Xuejian rape the two female Falun Gong practitioners. He did not say anything, nor did he try to stop the rapes.

After the rape, the police told Ms. Liu Jizhi to mop the floor, clean up the rooms and the office. According to Ms. Liu Jizhi, her legs were weak and she was absent-minded for she was shell-shocked from the horrible rape. After Ms. Han Yuzhi was raped, she was also forced to mop the floor and wash police cars.

That night He Xujian (still in police uniform) took Ms. Liu and walked around in the police station looking for a room to rape her again. Eventually he gave up the idea because there were people in every room. The police kept Ms. Liu until November 26 when her husband returned home and borrowed 3,000 yuan to pay the "ransom" to the police.

The aforementioned rape severely injured Ms. Liu Jizhi, as well as her husband and her daughters. For the past few days since the rape, Ms. Liu has been crying and sobbing every day and staring blankly. She looks very confused and absent-minded. We are currently collecting more information about the rape.

Masanjia Forced Labor Camp in Liaoning Province was infamous for having stripped 18 female Falun Gong practitioners naked and thrown them into a men's cell. After the gang rape, Masanjia Forced Labor Camp not only denied its crime, but also took many measurements to conceal its crimes and eliminate the evidences. Ms. Wei Xingyan, a graduate student at Chongqing University in Sichuan Province, was raped by a policeman in front of two female prison inmates after she was brought into police custody for practicing Falun Gong. After the policeman's rape was exposed, the police transferred Wei Xingyan elsewhere and no one could find her. All the Falun Gong practitioners that helped expose the horrible rape were each sentenced to many years in prison. Chongqing University even removed all the information about her department from the school's website and denied the existence of Wei Xingyan.

The criminals that persecute Falun Gong practitioners in Zhuozhou City:

Mr. Li Baoping and Mr. Yang Yugang from State Security Brigade of the Public Security Bureau. They are involved in each and every persecution against Falun Gong practitioners. Yang Yugang has been transferred to Shuangta Police Station in Zhuozhou City. 3632025 (Office)