Haven't I Seen You Before? (Photo)

On a mountain in Taoyuan County, Taiwan, a young woman quietly practices her exercises next to a site popular with visitors, come rain or shine. Her name is Fumei, and she has persisted in this for several years.. 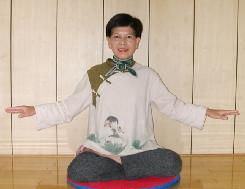 Many people that run across Fumei in daily life say to her, "You look familiar. Oh, I know! I've seen you teach people to practice Falun Gong on the mountain."

In fact, when Fumei first set up this practice site, nobody attended for the first one or two years. However, Fumei continued to practice the exercises, spread the Fa, and clarify the truth about Falun Gong by herself and many people obtained a preliminary understanding of Falun Gong. People are now coming to this site in increasing numbers due to her persistence.

Her neighbors admired her very much when they witnessed Fumei get up early to practice the exercises and hold Falun Gong activities with a radiant look on her face. They said that Fumei had been looking quite emaciated and sickly before she began her practice. They had felt anxious about her health, but dared not to ask what disease she had caught.

Before learning about Falun Gong, Fumei's personality was very introverted. She said: "I did not even go out to work prior to my practice. I stayed at home all day long and always imagined things with a negative outlook. Sometimes my situation was so serious that I even thought of suicide. Eventually I went to see a doctor who said that I had a tendency to depression. My whole family was affected by my condition."

She came into contact with Falun Gong by chance, and it quickly helped to restore her physical and mental health. She got rid of her pessimistic and downcast thoughts and eagerly greeted every new day on the mountain. Soon she lost her emaciated look and her cheeks became rosy. She always greeted others with a warm smile. Her neighbors were very surprised by the change in her and asked, "What medicine cured your disease?"

Fumei smiled happily. She knew that Falun Gong had given her a new life. She said, "My family is happy again. I am very grateful to Falun Gong because without it my family might have broken apart."

“A Medical Worker Discusses The Torture of Gao Rongrong”