Supplementary Report on Practitioner Mr. Cai Guojun, Who Was Persecuted to Disability in Yingchuan City

On the morning of May 27, 2005, police officers from the 610 Office of the Ningxia Autonomous Region, Yingchuan City National Security, and National Security Bureau of the Shizuishan District ransacked the rental apartment of three practitioners. The policemen confiscated their Falun Gong books, exercise music tapes, a tape player, and a palm PC. Practitioners Hu Jiancai, Qiao Jianhui, and Mr. Cai Guojun, were arrested and detained in a detention center in Shizuishan City. Later, Hu Jiancai and Mr. Qiao were transferred to a second detention center in Shizuishan City.

When Meng Changyi told Mr. Cai to kneel down, Mr. Cai refused. Meng then kicked Cai's calf and forced him to kneel down. After that, Meng stepped on his neck and shoulder and forced Mr. Cai's face to the ground. The pain was hard to bear.

Later they got a chair and bound Mr. Cai's hands and legs to the chair with steel rings. A board was put in front of his chest and tied up with the back of a chair by two belts. Thus, Cai could not move at all. He was tied up this way for more than 10 hours, until noon the next day. Mr. Cai waited for Meng and the others to go out for lunch to escape. He was sending forth the righteous thoughts when his bonds miraculously loosened. As he climbed down the drainpipe on the outer wall of the building, the pipeline pulled loose, and Mr. Cai fell from the forth floor. He fractured his pelvis, two vertebrae, and his right arm.

After four months of medical treatment, his right leg is still disabled. Currently, Mr. Cai has been released. Facing a petition from Mr. Cai and his family, the police are refusing to admit that they tortured him during their interrogation. They also rejected the requests from Mr. Cai and his family to investigate the people responsible and their requests for compensation. 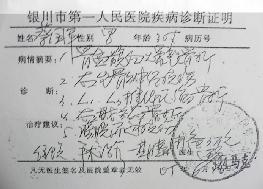 “Music: "People from the Seven Seas Are of One Heart"”