Details of the Activities of a Brainwashing Center in Guang'an City, Sichuan Province (Photo) 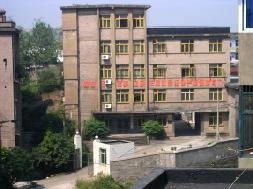 On two separate occasions, practitioner Ms. Wang Shiying has been beaten, forced to stand alone in the corner near the door, and punished with food deprivation. In an attempt to force Ms. Wang to abandon Falun Gong, eight men beat her, kicked her in the abdomen and private parts, and viciously whipped her head and back with a leather belt until the belt broke. After they tortured her in this way, they sent Ms. Wang to the Guang'an Mental Hospital for further persecution.

Another practitioner, Ms. Wang Yan, has been beaten many times, and she bears scars on her head and back. The perpetrators also injected her with unknown drugs and laced her meals with drugs. From June 16 to July 12, Wang Zhengjun regularly beat Ms. Wang with bamboo sticks and slapped her, causing her to bleed from the ear. As a result, she lost her hearing for more than one month. Zhang Xiaopeng yanked Ms. Wang's hair, throwing her against the walls and onto the floor. On September 21, Zhang got others to help him pry Ms. Wang's mouth open with chopsticks and force-fed her with unknown drugs. They told her that they intended to make her go insane. Her teeth were almost broken and there was blood all over the chopsticks. Because Wang Yan refused to give up Falun Gong, they injected her with drugs and sent her to a mental hospital. After the injection, they forcibly stamped her fingerprints on the hospital form. While Ms. Wang resisted the fingerprinting, assistant Li Shunying kept hitting her with a wooden club, kicking her and slapping her face. Wang Yan ended up with injuries in thirteen places as a result of this round of abuse.

From August 25 to August 27, assistant Wen Zizhen deprived Wang Yan of sleep and forced her to hold her arms up for eight hours. Wen beat her with a wooden stick each time she let her arms down. Wen also pinched the back of Ms. Wang's hand with fingernails. Ms. Wang's tormenters didn't give her any food from September 7 until noon on September 10, and then she only received half a bowl of rice. From September 7 to September 26, Wang Yan was seldom allowed to eat. After her release, Ms. Wang's family members said she was so emaciated that she had become disfigured.

On the morning of September 20, Ms. Wang Yan heard the sounds of a struggle coming from the next room. Later, word circulated that the brainwashing center director, Yu Xiaofu, and the doctor had been overheard talking about Mr. Zeng, a young man whom they'd injected with drugs that caused him to foam at the mouth. It had taken several people to hold him down for the injection. During the struggle, he'd been given an overdose of the drug, and the needle had broken off in his flesh. They were not sure if he would survive, so they sent him to the emergency room.

Practitioner Mr. Luo Hongqin of the Guang'an Weather Bureau was taken by force to the Huaying Brainwashing Center. In addition, over ten thousand yuan was transferred from his salary to the brainwashing unit.

Mr. Chen Tingyao is an older Falun Gong practitioner who was illegally sentenced to forced labor. After having served his sentence, he was sent to the brainwashing unit. Mr. Chen's legs were injured during his stay in the forced labor camp because the police had tortured him for not abandoning the Falun Gong cultivation practice.

Another practitioner detained there was Mr. Li Zhenghai. His face and hands were repeatedly struck with chopsticks by the persecutors.

Some of the younger assistants mentioned that long periods of confinement in isolation would make one's legs tremble while walking. They said that the room is like a cage, and that those who are kept there are put under so much pressure that no amount of money could be worth it. One can only imagine how terrible the situation is for the Falun Gong practitioners persecuted there.

The brainwashing center was sponsored by the Guang'an City Government and run by the local 610 Office. Those responsible for its operation are Su Cuihua, Yu Xiaofu, Xiong Changyong, Lai Yupu, and Wang Xianlai. During the weekdays, Su Cuihua of the city's 610 Office stays at the brainwashing center every week to organize the ongoing, brutal persecution of Falun Gong practitioners.

The perpetrators keep Falun Gong practitioners locked up at all time during the brainwashing session. They never mention the names, addresses, or work units of the personnel handling the persecution. The workers at the center get eight days off every month. They take turns going to Huaying City for leisurely lunches and dinners. On top of their regular pay, they get bonuses of 600 yuan a month plus travel expenses, and they are treated to food and drink by visiting officials from each town. The financial support for the brainwashing center comes from all the towns and villages that the detained practitioners are from. Each local government from these towns and villages must pay the 610 Office 8,400 yuan. Additionally, they pay 800 yuan a month for three months for each practitioner, plus 1,200 yuan for the two assistants watching the practitioner.

The current brainwashing session is not yet over, but the perpetrators are already planning for the next session.

Those who are involved directly with the persecution are: