(Clearwisdom.net) From November 10 to 11 in Tottori, the Japan Federation of Bar Associations (JFBA) held its 48th convention on the protection of human rights. Nearly 2000 human rights lawyers attended the convention. On November 10, they hosted a forum that was open to public. It was estimated that several thousand people attended the forum, including lawyers and the general public. Practitioners held an anti-torture exhibition outside the convention, and with banners and posters exposed the ongoing persecution in China and told people about Falun Gong. They also demonstrated the Falun Gong exercises and sent forth righteous thoughts. They called on the lawyers and the public to pay close attention to the ongoing tragedy in China and the lawsuits against the chief perpetrator of the persecution Jiang Zemin and other accomplices, including the Chinese Embassy in Japan.

(Clearwisdom.net) Italian Falun Gong practitioners held the first "Truthfulness Compassion Forbearance" International Art Exhibition in the town of Andorno. Maria Teresa Molineris, an art journalist for Italian newspaper Il Biellese, covered the exhibition for the paper. The journalist lingered for about twenty minutes in front of a painting entitled "Wish Fulfilled," marveling at the beauty of the artwork. The following is her article entitled "Use Art to Expose Brutal Persecution" published in Il Biellese. 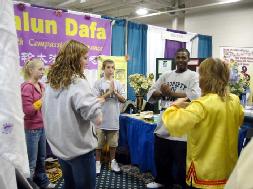 The annual Indianapolis's International Festival, a citywide celebration of the unique convergence of cultural events and developments, was held from November 3 to 6 this year. The four-day event including multicultural educational programs, entertainments and food attracted thousands of visitors. People came here to enjoy and learn about different ethnic cultures and customs. Some elementary schools and middle schools organized their faculty members and students to come to visit. The Falun Dafa exhibition booth, which put on display the beautiful traditional Chinese culture, naturally attracted many visitors, including many children who are interested in the eastern culture. This was the first time for many of them to hear of and experience meditation. "Falun Dafa" and "Truthfulness, Compassion, and Forbearance" are also planted into their hearts and will bring them a beautiful future.