(Clearwisdom.net) The annual Veterans Day Parade in New York City was held on Fifth Avenue in Manhattan on November 11, 2005.

This year also marked the 60th anniversary of the end of the World War II. The parade had an even larger scale than previous ones. Hundreds of processions and floats from veterans and serviceman and women presently serving in militaries as well as all kinds of military bands and honor guards participated in the parade. Among the numerous groups, the elegant and peaceful Falun Gong procession moved and amazed people. Spectators clapped to welcome them and to express their support. 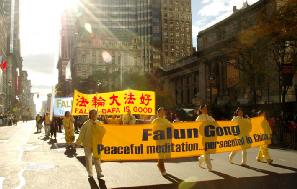 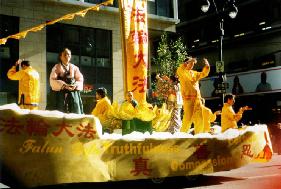 Falun Gong practitioners' float was a boat. The sail of the boat read, "Falun Dafa". On the boat, practitioners from different nationalities serenely demonstrated the Falun Gong exercises. Yong practitioners who sat in the lotus flowers also looked detached. The beautiful boat sailed on the Fifth Avenue, looking very mighty. A procession followed the boat demonstrating the smooth and elegant Falun Gong exercises. A waist drum troupe was at the end. The sound of drums to the music, "Falun Dafa is good" resounded along the route and the heroic bearing thrived. 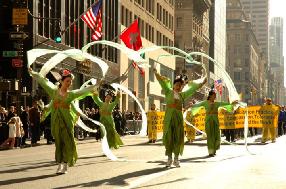 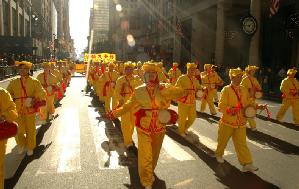 "Falun Gong, a peaceful cultivation practice, is persecuted in China".

The Falun Gong parade entry was warmly received along the route. The podium also greeted us, saying: "This is the Falun Gong group participating in our Veterans Day Parade. We welcome all Falun Gong practitioners."

Practitioners also waved to greet spectators and handed out introductory materials. A senior citizen named Molly told this reporter that she was very happy to see Falun Gong practitioners in the parade because they let people feel peaceful and serene.

"The more chaos caused by the war in the world, the easier for people to realize the value of 'Truthfulness, Compassion, and Tolerance'". Ms. Lin, a practitioner who participated in the parade said, "The world needs 'Truthfulness, Compassion, and Tolerance'. We'd like to take this opportunity of the grand parade to bring this message to more people."

Falun Gong practitioner Ms. Ge expressed, through attending this parade, we would like to share with more people the beauty of Falun Dafa and at the same time, we would like to call on more kind-hearted people to pay attention to the brutal persecution that has lasted for more than six years in China. We'd like to call on more people to bravely step forward to help stop this persecution and help bring the genuine peace and beauty to the human world.