The Parents of Gao Rongrong Long For Their Murdered Daughter (Photos)

Gao's mother previously had terminal cancer but survived after practicing Falun Dafa. Falun Dafa can bring people happiness, which was fully manifest in this older woman. The Chinese Communist Party (CCP), however, started the bloody persecution of Falun Gong and murdered her young daughter, Gao Rongrong. The elderly woman, who should be able to enjoy the peaceful life of a retiree, is now in tears on her 73rd birthday, mourning her daughter. 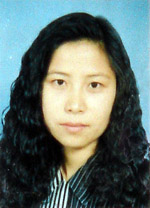 Ms. Gao Rongrong used to work at the Luxun Academy of Fine Arts in Shenyang City. She was subjected to cruel torture for her practice of Falun Gong. This happened at the hands of police officers Tang Yubao and Jiang Zhaohua at the Longshan Forced Labor Camp in Shenyang City. Their fiendish torture with the use of electric batons severely disfigured her face.

Her fellow practitioners managed to rescue her; however, the CCP and its heads - Jiang, Luo and Zeng - put her on a "most wanted" list and Ms. Gao was arrested again in March 2005. She was murdered just three months later, on June 16th. A beautiful and pure life passed away.

The persecution around her has not stopped yet. Several practitioners who were involved in her rescue, including Dong Jingya, Zhang Lirong, Wu Junde, Liu Qingming and Ma Yuping are still in detention. Some of them have been at the brink of death from abuse and torture. While Gao Rongrong was laid in the icy cabinet after dramatic sufferings, her family members were still not allowed to see her body. Her parents went to different government offices countless times to call for justice but the authorities just ignored them. The answer from the Shenyang Municipal Appeals Office was, "Falun Gong is illegal. Your case will not be accepted."

Qin Cunzhi, head of the Inspection Division of Liaoning Procuratorial Court, who organized the medical exam of Gao Rongrong's injuries, refused to provide his medical report and even intimidated Gao's parents saying, "Gao Rongrong was carried away [rescued by the fellow practitioners]. I should instead investigate whether or not you as her family members were involved." Gao's father was near collapse from such mental and physical duress.

"We thought Rongrong might be able to get through this time, since the whole world knew her face was disfigured from electric shock torture. Dare the persecutors continue to openly commit evil deeds? Those people kept lying to us and said they would let Rongrong come back home. Before Rongrong was sent to a hospital they still tried to cover up what happened. Su Jing and Zhao Laixi from the Masanjia Forced Labor Camp were still telling us she was ok."

Rongrong's parents recounted with grief and indignation, "Rongrong passed away four months ago. Those from the higher authority level down to the local level who were responsible for this outrageous deed were not investigated. Even those personally involved in the murder, such as Tang Yubao, Jiang Zhaohua, Su Jin and Zhao Laixi, are still free."

When we told her parents about the support for Gao Rongrong on the Falun Gong human rights website from people all over of the world, Rongrong's mother burst into tears, "Thank you, all the people who care about Rongrong. The persecution of Falun Gong practitioners must be stopped. The world should not permit such crimes to exist, and the persecution must be stopped!"

The parents said, "Those who risked their lives to save Rongrong gave our daughter a peaceful five months. We heard Rongrong had gained weight and was even able to walk along a wall. We thank them for risking their lives to save Rongrong. We hope those kind people who supported and helped Rongrong will also help the practitioners who rescued Rongrong but are still suffering persecution as well as all Falun Gong practitioners who are suffering persecution."

Rongrong's father told us a moving story. When Rongrong was in the hospital last year after suffering electrical shocks and was disfigured, many kind people called them to show their support and concern. One woman often called to inquire. Gao's father, who was reluctant to answer phone calls from overseas, was gradually moved by the kind young lady. He would always worry about that lady's safety and was concerned about how much money she would have to spend on the calls.

In June this year, around the days when Rongrong was tortured to death, the weather in Shenyang City was extremely unusual -- storm, hail, thunder and lightning that lasted several days. One day this young lady called again. The call came in the dark of night, with storms outside; the evil people were outside the door, monitoring. The old man did not turn on the light. He picked up the phone and, choking with sobs said, "Child, we have miserable wind and bitter rain here." The young woman said, "Daddy, many practitioners worldwide are holding candlelight vigils in front of Chinese consulates or Chinese embassies to commemorate Rongrong. The beautiful Rongrong has left us. We all feel sad. Daddy, you must be strong and not too sad!" Having the kindhearted lady calling him "Daddy" made the old man break down. He said, "Child, thank you. Although I lost a good daughter, now I have another good daughter." Since then the old man often expresses his concern, "My child, do not come back to China. It is dangerous!"

“A Practitioner's Daughter Clarifies the Truth”