On October 12, 2005, a Canadian MP, Mr. Jason Kenney, wrote a letter to the Chinese Ambassador to Canada, Mr. Lu Shumin, to convey his serious concerns regarding the continuing harassment and groundless detention of Mingli Lin by the Putuo District Detention Center in Shanghai. In the letter, Mr. Kenney strongly urged that Mingli Lin be swiftly released and reunited with his wife.

I am writing to you today to convey my serious concern regarding the continuing harassment and groundless detention of Mingli Lin by local police.

On October 9, 2005, Mr. Lin and his wife were arrested by a group of men and subsequently brutally interrogated at the local police station because of their belief in Falun Gong. Although Mrs. Lin was eventually released, Mr. Lin is presently incarcerated at the Putuo District Detention Center. He is being charged with making Falun Gong publicity materials.

Such actions on the part of local authorities are in clear contravention of basic human rights standards of freedom of expression and freedom of religious practice. I strongly urge that this matter be granted immediate attention and that Mingli Lin be swiftly released from the Putuo District Detention Center to be reunited with his wife. 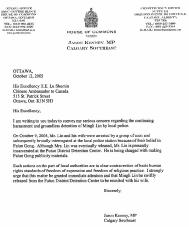