(Clearwisdom.net) The Liaoning Provincial government gave the Luotai Villa Provincial Brainwashing Center in Fushun City 1.4 million yuan ($171,000). It is used to persecute Falun Gong practitioners. To deceive the public, this brainwashing center is called the "Liaoning Provincial Caring and Loving Center" or the "Fushun Municipal Legal Education Center." It has been expanded in scale several times after the first session was launched in March 2003. Now it holds practitioners not only from Fushun City, but also from Jilin Province, the Daqing Oil Field, Linyuan City, Panjing City, the Liaohe Oil field, Shenyang, Dalian, Jinzhou, etc., for intense persecution.

The brainwashing center has two metal doors and the windows are blocked with stockades. The offices are on the first floor, and the second and third floors are designated for Falun Gong practitioners who are isolated from society and from their families. Only one message is allowed to enter the detainee's brain, "If you are not 'transformed,' you will be punished." The practitioners are forced to watch the videotape that slanders Falun Gong every day. Every practitioner is isolated in a room and always accompanied by "personal monitors." All of the activities of Falun Gong practitioners, such as eating, sleeping and even using the restroom, are under surveillance. The detained practitioner has to endure not only great spiritual pressure, but also the economic burdens, as they are forced to hand in 3000-3500 yuan of "learning & living fee and Medicare fee". 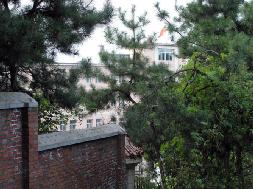 The building of the brainwashing class. Windows have iron bars.

“Using Righteous Thoughts Instead of a Human Mentality”