On the morning of September 29, 2005, Falun Gong practitioners in Washington, D.C., capital of the United States, held a press conference at the Rayburn House Office Building to express gratitude to the Office of the UN High Commissioner for Refugees (UNHCR), the U.S. government and the U.S. Congress and other organizations for rescuing Falun Gong practitioner Ms. Li Weixun from Shenyang City, Liaoning Province, China. 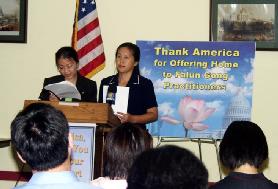 Falun Gong practitioner Ms. Li Weixun was detained numerous times by the Chinese Communist Party (CCP) for persisting in practicing Falun Gong. She was savagely tortured by the CCP police in early January 2002. She could not move her arms or legs, and she could not talk or eat. When she was on the brink of death, the perpetrators reluctantly approved medical parole and sent her to a hospital for emergency treatment, only after strong repeated requests from her family and friends. During her stay at the hospital, four police officers watched her around the clock. Ms. Li successfully escaped the monitoring and left China, and she obtained UN refugee status in Thailand.

On September 21, 2005, with the help of the UNHCR, the U.S. government and several non-governmental organizations, Li Weixun arrived in America and ended her several years of homeless and life in exile and ultimately obtained freedom.

At the press conference, Li Weixun said, "I'm very grateful to the U.S. government, U.S. Congress and the people of the United States for rescuing and helping me. The U.S. government has accepted me and other Falun Gong practitioners before me and provided us with a basic living guarantee. This has brought encouragement and good news to the righteous forces in the world and victims, protesters and people who love freedom despite being under the control of dictatorship. This is a good beginning."

Regarding the present situation of the international community, Ms. Li Weixun said, "Most countries' governments have been discussing human rights [with the CCP] in private, but avoiding directly facing the Falun Gong issue. This way of being manipulated by the CCP has obviously not been able to stop the persecution. It should be noted that the CCP's genocidal eradication and implication policies against Falun Gong practitioners is not only harming them physically, but what is more shocking, it is destruction and slaughter of people's spirits and beliefs! What is worth noting, is that if the international community continues to show indifference and compromises like this, then human beings will lose hope." Ms. Li continued, "However, the United States did not keep silent, and thus has set a good example for other countries. I believe the United States will do even better in the future." 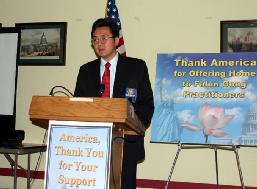 Dr. Liu said, "In the past six years, Falun Gong practitioners have spent a lot of time and our own salaries, and practitioners inside China have even risked their lives to clarify the truth to the masses of Chinese people. Many people have learned the truth, but there are still many people who do not want to listen. Because in the past years, the CCP's propaganda inside China has made many Chinese people have a negative opinion of us, even hatred towards us. They even believe that we are anti-China. Then why do they have such opinions of us? I think it is because of the CCP's brainwashing propaganda over the past several dozens of years, which has led to people's confusion and mixing of two different entities -- China and the CCP. Their way of thinking has even followed the CCP's line. Therefore, we feel it is a very necessary step towards stopping the persecution, to help people learn about the true nature of the CCP, how was it established, all the crimes it has committed against the Chinese people and the warped logics it has instilled into the Chinese people's mind."