On October 9, 2000, when I was validating Dafa at Tiananmen Square in Beijing, regular police and undercover police pushed me into a police van along with over a dozen other arrested practitioners. We were taken to the Tiananmen security office. Upon arriving, we found that there were already several hundred practitioners there.

About half an hour later, a bus came and took us to the Beijing Xuanwu District Public Security Bureau Division. After getting off the bus, we were ordered to sit on the concrete floor in the front yard. Several male and female police officers came out of the room. While insulting Dafa and practitioners, they walked up to us and said, "Those who will report their addresses, come in." When no one responded, one policeman said, "Then none of you want to talk, right? Wait until you enter the room and then let's see who dares not to tell."

He told a male practitioner in his thirties to enter the room. Immediately, we heard the sounds of a beating. After a while, two police officers brought the practitioner out. He could not walk on his own as a result of the beating. The police then ordered him to tell them his address, but he refused, so they struck his face until he fell down unconscious.

Later, the police once again ordered several practitioners into the room. Once again, we heard the sounds of a beating. This lasted until dark. Police then ordered the rest of us into a large room and ordered us to eat, but I did not have an appetite. When they were beating up practitioners, I was very nervous and I worried about those practitioners who did not make it back. At this moment, one of the female practitioners was taken away to the room. As soon as she came back, she collapsed to the concrete floor. Fearing that she might catch a cold, I slowly moved to her and sat by her, supporting her upper body. I asked, "What happened?" She told me, "Those policemen are not human. They asked me where I came from. I refused to tell them. They then said that they would rape me if I do not tell. I said, 'How you could do such a thing?' Several policemen pushed me down to the ground on my back. One person stomped on my stomach, but I still refused to tell them. Then they put a plank on my stomach and two people stomped on it, but I still did not tell them. So three people stomped on me. Later four and five people stomped on me." 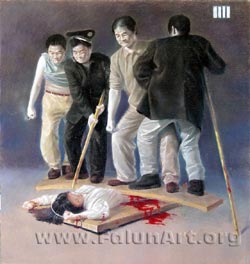 She also told me, "Another female practitioner, who is from Shanghai, is having her period. She was also stomped on until she urinated involuntarily. Her bladder is probably injured."

She also said, "Another female practitioner did not disclose her address. As a result, they struck her and threw her head against the wall. Afterwards, they threw her into a male cell."