(Clearwisdom.net) On October 8, 2005, the Tainan Regional Procuratorial Department, Tainan Municipal government, and Association to Protect Victims of Crime held a benefit garden party beside the Tainan City Hall. The sponsor also invited local public service groups to join the event and pay attention to and help victims of crime. The Taiwan chapter of the Global Mission to Rescue Persecuted Falun Gong Practitioners (GMR) was also invited. Many Taiwanese people have realized that the persecuted Falun Gong practitioners in China are victims and those who are responsible for the persecution are criminals.

During this benefit garden party, the rescue committee launched an activity to clarify the truth about Falun Gong to governments of different countries. Children also initiated a signature drive to call for the rescue of the children who are suffering from the persecution of Falun Gong. In addition, practitioners also introduced to tourists postcards to be sent to President Bush to call for the rescue of the persecuted Falun Gong children. Many volunteers from other public service groups also joined the effort. Chief prosecutor Mr. Chu Chao-liang from the Procuratorial Department of Tainan Regional Court issued a proclamation to express appreciation to the Taiwan Chapter of GMR. 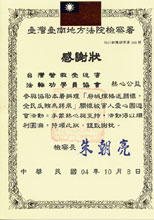 There was a particularly warm episode during the event. A volunteer from the rescue committee of the GMR felt sympathetic to those children who are under the persecution and bought some tickets from the benefit garden party. She personally sent those tickets to an orphanage and a family service center (where single-parents' children are taken care of) and invited the children there and their principals to join the garden party. She also related facts about the persecution in Mainland to them. All of the children came to attend the party and went to the booth to join the signature petition.