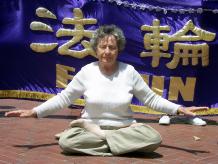 In the article, the author, Ms. Paola Emilia Cicerone, quotes a paper published in the "Journal of Medicine:" "Those who practice qigong feel very healthy, and such a feeling can be confirmed by scientific research. Qigong is a kind of mild practice that aims at mobilizing energy, and it is one of the foundations of Chinese medicine."

The article discussed the research of scholars at the University of Texas, who examined the effects of qigong by using a modern technology which allows simultaneous analysis of thousands of genes. Those scholars studied one group of leukocyte (blood cells that engulf and digest bacteria and fungi; an important part of the body's defense system) of people of Asian decent who have practiced Falun Gong for at least one year, comparing them with a group of people who had never practiced Falun Gong. They found that the leukocytes of those who practiced Falun Gong were more vigorous, creating stronger immunity. Consequently, those people could recover from infection much faster than the control group.