The Chinese Embassy in Germany Refused to Renew My Passport (Photos)

My name is Qi Luyi, and I came to Germany in 2000 to study Economics in a German University. I started practicing Falun Gong in 1998 when I was working. Since Jiang Zemin and his group initiated the persecution against Falun Gong in July of 1999, the company I was working for deliberately made things difficult for me and I was forced to leave my country.

In June of this year, I married a German Falun Dafa practitioner, and therefore I needed to change my surname of Qi to my husband's surname. Later on, the foreign management office told me that I should go to the Chinese Embassy to make the same name change on my passport.

So I went to the Chinese Embassy in Bonn on Monday the 6th of December 2004. As my fianc¨¦ and I had come here in April to get our proof of being unmarried and our passport extension, I never thought that my passport would be held up this time. 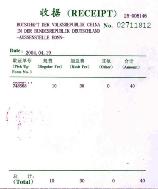 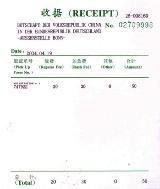 Above are the receipts for my passport extension and proof of marital status, made out in April of 2004

It was 10:40 in the morning. Just like the last time I had gone to the Embassy, I showed them my marriage certificate and the original copy of the certificate confirming that I had changed my name. I also handed in all the required documents, my passport and photo, to the same female officer I had dealt with the last time. I asked for the special expedited 1-hour service. The officer gave me a price list showing that the normal service for changing my name was ten Euros, with the special expedited service requiring an additional thirty Euros. She asked me to pay the forty Euros at the payment window in half an hour. She said that after that, I needed to return to her and collect my passport with the changed name.

At about 11 a.m., a male officer whom I had never seen before appeared. He was not very tall and was in his forties. He was holding my passport and said to me, "Qi Luyi, come with me, I want to ask you something." He took me to a meeting room next door while he was talking to me. He asked me when I came to Germany, and I told him. Then he asked, "Did you practice Falun Gong in China?" I replied, "Yes, I did." "Are you still practicing it?" "Yes, I am," I replied.

Then he asked me whether I had joined any activities, for example, practicing the Falun Dafa exercises with other practitioners or taking part in any experience sharing meetings. He wanted to know who joined these activities and said that I was required to write a report. I did not give him any information but said, "I know what you are doing. It is not the first time this kind of thing has happened, but doing this kind of thing is not good for you."

I said: "I know you have to do this because you are required by your boss. After the Second World War and the Great Cultural Revolution, those people who did bad deeds were all punished for what they had done, but many were only scapegoats. I think you know about the Communist Party in depth. In every movement in which they persecute people, only a small part of the people dared to speak out the truth that they held in their conscience."

He said, "What you just said has nothing to do with your passport. You need a legal document..." I told him that I had looked at their website and I had handed in what I was supposed to, including all required certificates and documents. He said that he needed to check on the computer, and then went out. He came back after a while and admitted, "Yes, you do not need any more paperwork - the legal document is only required in China when getting married. Are you still going to practice Falun Gong?" I replied: "Of course I am going to practice it as it is such a great cultivation way, why not? Dafa is widespread and practiced in over sixty countries, and has won over 1,000 awards. Don't you know about the Communist Party? The Tiananmen Square self-immolation was staged by them - you will understand if you see the slow motion video." He silently agreed.

Then he said that he needed to consult his superior about my passport. I pointed out, "You don't want to return my passport to me, is that right? By doing this you only add one more crime to what you and Jiang's group have done. I find the workers sitting here are actually quite nice, we are all Chinese, so why..." He defended himself immediately: "No, we will send it back to you shortly. You need to write..." I stopped him and said: "You know I won't write that report." He tried to defend himself again, "No, I mean you need to write your address down. We need to think about your case. We will return the fees you paid, then we will send the passport to you." I pointed at the receipt and told him that I had ordered the special expedited service, and that he must return my passport to me immediately. In the end, he dashed into his office and never returned. The female officer came out and gave me a white envelope to write down my address, which I did. I repeated what I said to the male officer, "If I don't receive my passport in one week, I am going to make it public." Finally, at about 12:15, I left.

Our conversation was conducted amicably, but the officer looked very nervous, with a guilty conscience throughout the whole process. I was the one doing the talking most of the time, and I felt that he took in what I said. He definitely knew that he was doing something illegal, and therefore he was in and out the meeting room several times, always looking cautious. I had left home that morning at 5 a.m. and didn't get back until about eight in the evening. As a result, I missed class and my passport was gone when I came back. Prior to my trip to the consulate, my mother and father-in-law told me not to trust the Communist Party, that this kind of small thing of changing names could be done by mail. I had phoned the Embassy about this, and an officer told me, "You must come to the Embassy in person. This is the regulation of the foreign department." I dutifully followed what they required, but still lost my passport.

Afterwards I realized that I should have spoken more about Falun Dafa and the persecution to the officers at the consulate, and to the German people who were there to obtain visas. I should have also asked for the name and contact information of the officer who kept my passport and demanded confirmation of their keeping it. What they have done is totally against the law, no matter whether my passport is kept for one hour or a day. This event has my husband's relatives very discontented, and they all said that the Chinese Embassy is behaving like hoodlums. I will continue to make this issue public in German society. Each day that they keep my passport, more German people will see the Embassy's evil tactics and how Jiang's regime extends the persecution of Falun Gong overseas.