Give Them the Best: Falun Gong Spreads Quickly in Taiwanese Schools (Photos)

It was morning in Taihe Elementary School in Chunghua City, and from the classroom one could hear the voices of students reading aloud:

"Nothing is as profound as BUDDHA LAW. Of all teachings in the world it is the most wondrous and highest science. To open up this field, ordinary people have to fundamentally change their way of thinking. Failing that, the reality of the universe will forever remain something of a myth to mankind, and ordinary people will forever grope around inside the box created by their own ignorance. ..."

Different from a normal school morning study session, the students of Class A of the 6th Grade start the day reading from Zhuan Falun.

Classroom director and Teacher Chen Jinmei said, "A few years ago, I found the book Zhuan Falun. After I read the book, I understood the meaning of life. Since then, I have benefited a lot from the practice of Falun Dafa, so I want to give my students the best thing I have obtained in my life. I hope they will benefit as much as I did." 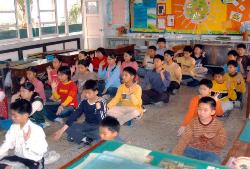 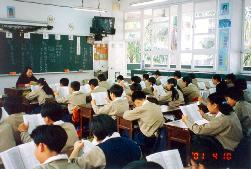 Students of Class A, Grade 6 in Taihe Elementary School, Chunghua City, Taiwan are studying Dafa and practicing the exercises

For three years, the teacher and students have studied Zhuan Falun and other Falun Dafa books during morning study time. They do the exercises during the noon break, and share their cultivation experiences with each other during activity times. The students thus grow up and study in an environment of "Truthfulness-Compassion-Forbearance," and benefit greatly, both physically and mentally.

In Taiwan, there are many teachers like Chen Jinmei who have introduced Falun Dafa to students after they benefited from it themselves. Because of the tremendous improvement in students' mental and physical health and in their moral level, the Education Bureau has given Falun Dafa unanimous positive confirmation.

Between the end of January and early February, the Chunghua County government organized Taiwan's first Falun Gong Research and Study Camp for teachers. Now, during every summer and winter vacation, there are 20 to 30 Falun Gong Research and Study Camps for teachers in Taiwan. After a few hundred camps, Falun Dafa and "Truthfulness-Compassion-Forbearance" have been planted in the students' hearts through their teachers.

Ms. Ye Zhiyun is a teacher in Xinzhu. Every Tuesday and Thursday, she leads the students from Grade 3 to Grade 5 to study Falun Dafa and practice the exercises during break time. She said, "After a student learns Falun Dafa, their moral standard is raised and they become better students. There is a severely retarded and hyperactive student in my class. He made a lot of trouble for the other students and the whole class couldn't concentrate because of him. Many classmates didn't like him. Some even jeered at him or bullied him. After the class heard several short stories about 'Truthfulness-Compassion-Forbearance,' the class changed their attitude. Other students are now willing to help him and take care of him instead of bullying him. The behavior of this student has also improved."

Teacher Li Minyu of Hualian City Mingyi Elementary School, who won the Excellent Teacher award, also established a Minghui Group that meets during the school's weekly 80-minute student group activities. The students practice the Falun Gong exercises, read Hong Yin, and study the principle of "Truthfulness-Compassion-Forbearance" and how it relates to even small things in everyday life. The students have changed quickly. The following is a sampling of some of the children's experiences after studying Falun Dafa for one semester.

Yingxun: "After I learned Falun Gong, I went home and taught my younger brother. He used to be sick often. Now he rarely gets sick."

Qiaoyuan: "After practicing Falun Gong, I began to be considerate of others and I don't get mad easily any more."

Meihui: "Though I am happily practicing Falun Gong, I am worried about my mother who is working hard and is very tired. I hope Mom can have time to learn Falun Gong too."

Peijing: "Falun Gong gives me health and happiness. Now I like to read and I feel I am more capable. I have more friends."

Jingru: "I like every one of my classes. I learned that one should not take advantage of the weak and small ones. One should do good deeds and help others."

Yuling: "When I get tired of doing homework at home, I will practice the Falun Gong exercises and that will make me relax. In this way, I will finish my homework quickly."

Education is a long-term investment. The teachers of Yunlin County's Tuku Elementary School who attended the two-week Falun Gong study camp believed that it was important to plant "Truthfulness-Compassion-Forbearance" in students' hearts as early as possible. So they suggested to the principal that the school introduce Falun Gong to all students. With the support from Principal He and teachers from each class, the first "Falun Gong Children Physical and Mental Health Camp" was organized. The applications flooded in, and about 200 students registered for the camp.

One parent who participated in the camp said that this was her first time to accompany her 4th Grade child at a camp. She was happy to see that the children were interested in body and mind cultivation. She said Falun Gong's teaching of "Truthfulness-Compassion-Forbearance" was very good.

According to an unofficial survey, there are over 300,000 Falun Gong practitioners in Taiwan, since Falun Gong was introduced there in 1995.

At the university level, over 20 institutions of higher learning have Falun Gong clubs, including Taiwan University, Tsinghua, Jiaotung, Central, Chungzhen, Chungshan and Chenggong.

Falun Gong is spreading quickly in Taiwanese kindergartens, elementary and high schools, college and universities. It is like a clear stream entering the education system. Just as Principal of Taipei City Shengshen Elementary School, Liu Meie, said, "This is the best choice for life education."