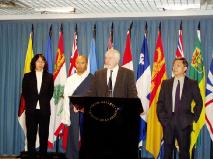 In the press conference, Mr. Alex Neve, Secretary General of Amnesty International Canada appealed to the Prime Minister to urge the Chinese authorities to improve China's human rights. The first of the four requests he made was: Pressure China to release the countless prisoners of conscience who are currently incarcerated in prisons or labor camps throughout China, and make just verdicts for victims who were unjustly tried.

Mr. Neve mentioned that victims of many of the cases occurring in China have special connections with Canada. Many imprisoned Falun Gong practitioners have family members in Canada. Neve pointed out that Prime Minister should raise these people's cases to Chinese leaders.

Mr. Neve's second request to Prime Minister Martin was to encourage the people who have had the courage to uphold and promote human rights in China. These people have even sacrificed their freedom in order to safeguard human rights. Mr. Neve said that the Prime Minister should stress that Canada is absolutely not a country that abuses its own laws and regulations to punish people who uphold human rights.

Neve claimed in his letter to the Prime Minister that reports showed technologies provided by many corporations in foreign countries including Northern Telecom are employed in China's internet censorship. Many people are arrested and imprisoned simply because they use internet as a peaceful tool to express and exchange their thoughts.

Behind the statement that "Stability overrides all other considerations"

Mr. Du Zhifu, representative of Democratic China, Ottawa Chapter confirmed the systematic persecution encountered by dissidents in China over the past few months. He said that the Chinese government has always stressed that "stability overrides all other considerations", however, stability does not come from more and cruel suppression or dictatorship. Instead, stability comes from rule of law, freedom and rights, especially basic human rights. Canada's legal system and respect to human rights are what China needs most.

Grace Wollensak, a representative of Canadian Falun Dafa Association, expressed that the Chinese government has always denied its violations of human rights. Taking Falun Gong as an example, many practitioners risk their lives to expose the real situation. Yet, their acts are labeled by the Chinese ruling party as "disclosing state secrets". According to NGO reports, 108 Falun Gong practitioners were sentenced up to 12 years in prison simply because they disclosed their personal experiences of persecution overseas through the internet. Three of them were tortured to death.

Natural disasters cannot be controlled, but murders can be stopped

Mrs. Wollensak said, "According to reports, currently, 50% of prisoners in prisons and labor camps are Falun Gong practitioners including 14 who have family members in Canada. One of the 14 practitioners was sentenced to 14 years in prison simply because he would not give up his practice of Falun Gong." Mr. Dai said that perhaps one is unable to control natural disaster such as tsunami, but murders can be stopped. We appeal to Prime Minister Martin to urge the Chinese authority, during his state-visit to China, to stop this anti-human persecution of good people.

Canadian Prime Minister's trip is from January 15 to 23. He will visit China and Japan after visiting Thailand, Sri Lanka and India, the countries hit by tsunami.