(Clearwisdom.net) The cadres of Dalian Harbor closely follow the requirements and methods of Jiang Zemin's regime in brutally persecuting Falun Gong practitioners. If their best employees are Falun Gong practitioners, they send them to mental hospitals, detention centers, or forced labor camps. They dismiss them from their jobs simply because they practice Falun Gong. According to the limited information available, the Dalian Port Group Corporation has unilaterally cancelled work contracts with at least twenty employees since the persecution of Falun Gong began on July 20, 1999. The following are facts of the persecution within the various companies of the Dalian Port Group Corporation.

Falun Gong practitioners Wang Houji, Cong Shuxun, Yu Yonghou, Qi Hui, and Qu Hui were all illegally detained and sent to forced labor camps, and the Dagang Port Company canceled their work contracts. They were only paid about 100 yuan per month for living expenses while they were working because they were Falun Gong practitioners. Cong Shuxun's wages were completely confiscated. Han Jilin was detained and subjected to extortion. His monthly income was less than his living expenses. After Falun Gong practitioners served their terms in the forced labor camp, they were all dismissed from their employment. Qu Hui was reported by the corporation's own security department, and sent to the Dalian Forced Labor Camp. Qu was tortured to the point of being disabled, and lost the ability to take care of himself.

Qu Hui before the persecution 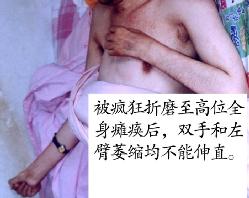 Since July 20, 1999, the Dalian Bay Port Company has illegally dismissed Falun Gong practitioners Gao Lin, Chang Xuexia, Cheng Qiang, and Wang Jixin without any just cause. The company even levied fines on them. Chang Xuexia and Cheng Qiang were sent to the Dalian Forced Labor Camp, where Chang Xuexia was subjected to inhuman torture.

Falun Dafa practitioner Gong Xudong was illegally sent to a forced labor camp. Prior to this, as an employee of the Dayao Bay Port Company, he was paid only 100 yuan a month. After Gong Xudong was detained at the forced labor camp, the Dayao Bay Port Company canceled his work contract. Falun Dafa practitioner Cai Zhongxin was sent to a brainwashing center.

Falun Dafa practitioners Li Renlong and Zhang Xiaodong were detained and sent to a forced labor camp. While they were there, the Xingang Port Company cancelled their work contracts. Before they were sent to the labor camp and lost their jobs, they were only paid about 100 yuan a month. Cai Furong, Zhang Huanying, Xu Guihua, Wang Xiuzhi and Xu Guibin also suffered the same financial persecution, and were removed from their workplaces by the newly established Rixing Company of Dalian Harbor. Xu Guibin was forcibly taken from work to a brainwashing center. Cai Furong, Zhang Huanying, Xu Guihua, Wang Xiuzhi and Yu Hongshun were all detained. Ms. Wang Xiuzhi was sent to Masanjia Forced Labor Camp, as was Ms. Wu Hong, after being removed from her workplace.

After serving their terms in the forced labor camp, the Xingang Port Company dismissed all practitioners from their employment. When practitioners made reasonable arguments against this action, the officer in charge said, "Whomever you want to sue, just go ahead!"

Practitioners who went to appeal in Beijing were all illegally detained, fined 5000 yuan, dismissed from the company or put under observation in the company for one year. Some were directly removed from the workplace and sent to forced labor camps. Almost all practitioners' homes were ransacked after they were detained.

“Stories from China: People Are Learning and Spreading the Truth about Falun Gong ”