I have read your letter with great interest and I have to say that I am truly shocked upon learning of what happened in South Africa. The Netherlands must do everything in his power to ensure the safety of Dutch and foreign Falun Gong practitioners at the coming top meeting. As a democratic country it should ensure everyone's rights.

We of the PVDA will watch closely to see if all of our national principles of our juridical system are being followed at all times. Any indication of the contrary will be a reason for us to investigate the issue and will in that event notify our cabinet at once.

In principle we rest assured that the AIVD and other relevant governmental organizations have made a just and realistic assessment of the possible risks prior and during the top meeting between the European Union and China. The AIVD claims to exclude any potential foreign involvement. So far safety has been ensured during the Dutch chairmanship in the European Union.

From a wider perspective PVDA is very concerned about the persistent violation of human rights in China. We have insisted numerous times to increase international pressure on China via international forums in an effort to enhance the human rights situation of practitioners of Falun Gong, as well as that of the Tibetan people. We think that the best way to achieve this effect is via orchestrated international sanctions and critique. It is a shame that many countries while clinging on to their economic interests fear to confront these inhumane situations. This has resulted that with regard to China's misbehavior, a clear international stance has yet to be concluded.

Now and in the future, we of the PVDA will not neglect our duty to help focus attention on the human rights situation in China and will insist the cabinet that it shall raise this issue in international meetings.

Bert Koenders
Member of party of the PVDA 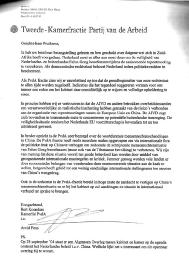 “Canada: Member of Parliament Libby Davis Writes to Prime Minster and Other Ministers Concerning the Violation of Human Rights in China and the Persecution of Falun Gong Practitioners”