(Clearwisdom.net) While the 59th United Nations General Assembly convened in New York September 20 to September 24, practitioners from all over the world gathered to demonstrate the peace and beauty of Falun Dafa and raise awareness of the persecution in China.

Practitioners' activities included press conferences, anti-torture exhibitions, participating in local fairs, showing truth-clarification videos, informational poster displays, distributing flyers, and forming a "Great Wall of Courage". Practitioners from Taiwan, Hong Kong, Australia, Singapore, New Zealand, Japan, Canada and many European countries as well as practitioners from across the U.S. participated in these activities. Many of the practitioners, including young mothers and their babies, came a long way to clarify the truth about Falun Gong and the persecution to the people of New York.

Practitioners from Australia and Taiwan were clarifying the truth at the intersection of 42nd Street and Broadway as well as on 7th Avenue. They related two stories about their experiences there:

A couple from Sydney, Australia told the practitioners, "We have seen you in Sydney." The practitioners from Sydney then told them: "To end Jiang's and his followers' persecution of Falun Gong as soon as possible, we have come here to tell people about the persecution." After listening to practitioners' explanation, the couple was very touched. They thanked us repeatedly and wished us success.

One day, when the truth-clarifying activities were about to adjourn, a person came to the intersection of 42nd Street and 7th Avenue where the Taiwanese practitioners were. He said that he came to learn the Falun Gong exercises. He told the practitioners that he obtained a Falun Gong flyer two weeks ago from a Los Angeles practitioner. He then started to learn Falun Gong by simply following the pictures on the flier. He thus only knew two of the movements from Exercise One. Nevertheless, he felt the strong energy flow when he did the two movements. Therefore, he had been practicing them for two weeks.

As the Taiwanese practitioners didn't know how to teach him in English, I went forward to teach him and thus got the opportunity to chat with him. He was very dedicated while learning, and carefully drew every move of the exercises in his notebook. He was a little embarrassed and told me that those were just drafts and he would draw them again more carefully at home.

I gave him a flyer with New York contact information and told him where he could learn the Falun Gong exercises. I also asked for his phone number as I wanted to know his progress. I can tell that he is a very honest and kind man who really wants to learn Falun Gong. I wish him well.

We also encountered many other people who wanted to learn and we told them one by one where they could find practice sites. It is just as Master told us, the next generation of practitioners is now coming to Dafa.

A New Yorker is Touched by "Truthfulness, Compassion and Forbearance" 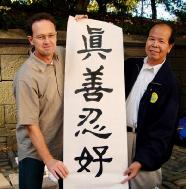 The gentleman who loves calligraphy (left) and our practitioner holding up the characters, "Truthfulness, Compassion and Forbearance"