(Clearwisdom.net) In March 2001, guards at the Longshan Forced Labor Camp in Shenyang City started the systematic persecution of Falun Gong practitioners so as to "forcibly reform" them, a euphemism for brainwashing. The persecution was carried out under the direct supervision of Li Fengshi, the primarily responsible administrator. Li once ferociously told Falun Gong practitioners who were steadfast in cultivation, "This is an institution of coercion! You must be reformed, whether you agree or not!" Female prison guard Wang Jinghui said, "You don't want to be reformed? Then your stay here won't be comfortable!" Team leader Tang Yubao usually kicked and punched practitioners or shocked them with electric batons. He also verbally abused them.

Below is a representative and partial portrayal of torture methods used on Falun Gong practitioners in Shenyang City's Longshan Forced Labor Camp. The actors' clothes are actually those worn by practitioners when they were illegally held in that camp.

Several police officers pushed a practitioner to a squatting position, with the head bent in front of the legs. The practitioner's head and back continued to bend forward until the head touched the ground and the upper back leaned against wall. The practitioner was fixed in this position for long hours.

In August 2001, in the No. 1 Division Head office, the guards ordered prisoners to torture Falun Gong practitioner Zhang Lirong with this method.

Several guards pushed Falun Gong practitioners to kneel down on the cement floor for long hours. Practitioner's kneecaps felt as if they were fractured and piercing into the flesh. It was agonizingly painful.

In March 2001, Falun Gong practitioners Sun Fengxin and Zhang Lirong were tortured with this method in the Longshan Forced Labor Camp.

While squatting on one foot, the other foot was pulled on top of the squatting thigh. In March 2001, Falun Gong practitioner Chen Aiping was tortured with this method in Longshan Forced Labor Camp.

Later on, the team leaders kept Zhang Xiufang alone. After a while, Zhang Xiufang dashed to the courtyard screaming and crying in pain, but was dragged to the corridor on the first floor by the team leaders. Soon, "bang!" Zhang Xiufang fell down and her head hit the metal heater in the corridor. A few seconds later prison guard Wang Jinghui said, "She is faking!" Then the beating and sounds of verbal abuse of the police head could be heard. When Zhang Xiufang was sent back to the cell with the help of practitioners, her face was swollen and covered with bruises. There were bloodstains on her sweater. She had been shocked to the point of having lost control of her bladder, could not eat or drink normally and could not walk for over ten days. Her mood became unstable as well. She would suddenly burst into crying or laughter; she was mentally traumatized.

Practitioners sent to the male forced labor camp were subjected to the following torture methods: "Squatting on a Small Stool;" "Force Feeding" and "Held in a Ball-like Position." 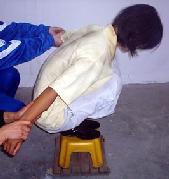 They put items underneath to raise the height of a small plastic stool. Then a practitioner was forced to squat on top of it for physical punishment and humiliation. The stool is about 20 cm wide, 30 cm long and 20 cm high (note: 1 cm is about 0.4 in).

Several police officers pushed Falun Gong practitioners to a squatting position, with both arms twisted behind, the knees pulled outward and the feet pushed inward, so that they were close to each other. Then the police grabbed the practitioner's head and buried it between the legs so that it touched the ground. The practitioner's whole body was contorted. With many policemen forcing the holding of this position, the practitioner could not move. A normal person usually couldn't stand this torture method for even five minutes. However, because Falun Gong practitioners had been deprived of sleep and had been physically punished for long hours, and they had already been tortured to the state of semi-consciousness, they were usually "Held in Ball-like Position" for 40-60 minutes. After that, their hair and clothes were soaked with sweat. In the meantime, the practitioners' bodies lost all strength, and they were close to going into shock. Because their legs were split beyond limits, it caused bleeding from the lower body.

At the end of June 2001 in the Zhangshi Forced Labor Camp, practitioners Wang Hong and Zhang Lirong were savagely force-fed. (Longshan Forced Labor Camp was the party behind the persecution). Several police fixed Falun Gong practitioner on a chair with the head bent backward, the nose pinched and teeth pried apart with a metal spoon. Then, half of a piece of crumbled cornbread was put into a soda drink bottle, with the addition of salted water. Since the nose was pinched, the practitioner could only breathe through the mouth. Food was fed with each inhalation of a breath. Sometimes, they choked on the mixture and it went everywhere. The practitioners who suffered from force-feeding said afterwards, "I don't know what they put into my body. The only sensation was bitter and salty." This kind of painful torture happened three times a day.