Illustration of Torturers Who Suffocate and Humiliate A Falun Gong Practitioner by Stuffing His Head into the Toilet Bowl
Torturer: "I will see if you will practice Falun Gong or not!"
Note: In the actual torture, there is an average of four to five men torturing a Falun Gong practitioner. 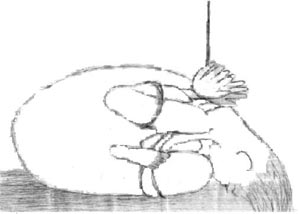 Some Falun Gong practitioners have suffered from this type of torture repeatedly. Each time the torture was very long and they were not allowed to use the bathroom. They were subjected to the most indescribable, excruciating pain for the longest time. The police officers did not loosen the bindings until the practitioners were extremely dizzy, and their bodies turned dark purple and numb. During the slow, painful torture, the police officers keep shouting at Falun Gong practitioners, "We are helping you to practice sitting meditation! We are helping you enhance your cultivation level! We are doing you good!" In actuality, anyone subjected to this type of torture would feel better off dead. Each time Falun Gong practitioners were released, they lost all feeling in their bodies and could not move at all.