My Horrifying Experience at the Hands of the Police (Photos)

(Clearwisdom.net) It was noon on July 19, 2000 and I was taking a break at home, wearing shorts and a short-sleeved shirt because of the hot weather. All of a sudden, four or five policemen broke into my home and questioned me as to whether I was still practicing Falun Gong. They handcuffed me and ordered me go to the police station with them. My family members tried to reason with them, but the police threatened my family with handcuffs and electric batons. They dragged me into a police vehicle while verbally abusing me. However, they didn't go to the police station; instead, they drove me to a remote forest farm.

Upon arrival, the police officers pushed me into a small room and ordered me to kneel down. I asked them what I had done and why they were treating me like that. They kicked me and forced me to kneel down. After beating me for a while, they ordered me to go outside to the middle of the courtyard, and hung me from a tree by my handcuffs. While abusing me, they questioned why everybody else went to Beijing and I didn't go; they said if I did go, they could send me to a forced labor camp. The police kept beating me and spraying water on my body and mouth with a hose. They asked if I cultivate "Truthfulness-Compassion-Forbearance." I answered, "Yes," and told them that I hadn't done anything wrong. They said that I was stubborn and splashed water into my mouth while holding my head. They also beat me with a rubber club. My entire body was covered with injuries. After torturing me for a few more days while hanging me from the tree, they finally notified my family. I was allowed to go home only after my family members paid them 500 yuan (1). 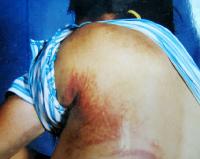 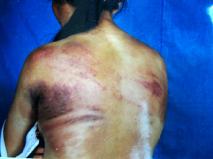 The injuries got better after a few days of rest at home. My relatives and friends advised me to take photos of my injuries. We went to the Beijing Disciplinary Inspection Committee to lodge a complaint about the local police station. The person in charge asked me about all the details. They were shocked by what happened and claimed that they would look for those people and punish them, but nothing came of it. A few years have passed and the people who abused me so severely are still at large.

I believe that justice exists, and there is nothing wrong with following "Truthfulness-Compassion-Forbearance".

(1) Yuan is the unit of currency in China; 500 yuan is equal to the average monthly income of an urban worker in China.