The Chinese Embassy in Tokyo Denied My Passport Extension (Photo)

(Clearwisdom.net) My name is Chen Xuejuan. I am a Chinese citizen and a Falun Gong practitioner. My husband works at a Japanese company. My status in Japan is currently "spouse of a legal resident alien."

In April 1990, I came to Japan to study. Due to the pressures of being a foreign student, my poor health became worse. After I went to work in a Japanese company, my physical condition became poorer. I had headaches, backaches, insomnia, skin disease, etc. and my cervical vertebra injured as well. I often went to a hospital to see a doctor but my illnesses were not cured. Without any other choice, I had to resign from my work and go back to China to rest for three months. During that period, in August 1996, I started to practice Falun Gong. As soon as I learned the exercises, I felt very comfortable and knew that this was the practice I had been looking for for many years.

In September of that year, I returned to Japan and recommended Falun Gong to my husband. As soon as he picked up the book Zhuan Falun to read, he found it very good and started to learn the practice as well. Both of our health conditions improved significantly. The symptoms of insomnia, headache and backache were all gone. We no longer needed to go to the hospital as we often did before. So we were very happy. In order to share the benefits of Falun Gong with others, my husband introduced the practice to his brother and sister-in-law. They started to practice and their sicknesses disappeared as well.

However, despite the good nature of Falun Gong, in July 1999, out of fear that his power was threatened by Falun Gong, and out of his own personal interests and jealousy, China's ex-Chairman Jiang Zemin started a crackdown in an attempt to eradicate Falun Gong. The methods used included: arresting practitioners, ransacking and burning Falun Gong books, reporting practitioners to authorities and punishing their family members, friends, relatives and employers, etc. In addition, the state propaganda machine was used to thoroughly defame and slander Falun Gong and its founder Mr. Li Hongzhi. For example, the "Tiananmen Self-Immolation" was staged and the "Zhejiang Beggar Murder Case" was created in an attempt to incite the animosity of general public towards Falun Gong.

In order to let more people know about the real situation of Falun Gong, and in order to end the persecution sooner, in the past several years, apart from continuing to practice the exercises, I actively participated in various appeal activities.

On December 10, 1999, I went to Hong Kong to attend the Asia Pacific Falun Dafa Experience Sharing Conference. Due to Hong Kong regulations, I and a dozen Chinese practitioners from Japan went to Shenzhen to apply for a transit visa. We planned to have dinner in Shenzhen before returning to Hong Kong. Because one of the practitioners was on the Chinese government's "blacklist" (1) he was stopped when he went through customs in Shenzhen. Other practitioners waiting for him outside were stopped as well. They confiscated our Falun Gong books that we had taken with us, took away our address books to gather information on practitioners and also took pictures of us. Several hours later, my passport was stamped with a word "cancel." They did the same thing to some other practitioners' passports.

Later on, those few dozen practitioners, who had been stopped at the Shenzhen customs, have all experienced some trouble when going back to China or applying for passport extensions.

On June 30, 2002, I planned to attend a Falun Gong Experience Sharing Conference in Hong Kong. But at the Hong Kong Airport, while going through customs, I was denied entry without any explanation. Instead, I was taken to a room and kept under surveillance by many police. The police even kept an eye on me when I went to the restroom. On the morning of July 1, many police came. I pointed at the poster on the wall which stated that one has the right to have a lawyer and told the police that I would like to hire a lawyer, but they ignored my request and demanded to check the luggage. As they checked my luggage, a plainclothes person video-taped the whole scene. I turned away to avoid the camera, but a policewoman forced my head in front of his camera. I told them that I would like to fly back to Japan as scheduled on July 2, but they deceived me by saying that there would be no seat available on the flight on July 2. Thus, three police escorted me forcibly to an airplane.

Because my passport would expire very soon, on June 20, 2003, I went to the Consulate Department of the Chinese Embassy in Tokyo, Japan to apply for an extension. The receipt said that I could come to pick it up on June 25. Before I went to get my renewed passport, I received a telephone call notifying me not to turn in the fee because a consul wanted to talk to me. Around 11:30 a.m. on June 26, I went to the Consulate Department. The person who talked to me was Wu Xiaoyin (perhaps a first class secretary). His sole duty all these years has been to handle the Falun Gong "issue." He said that I had been arrested in China and I replied that I was arrested only because I practiced Falun Gong, and I had never broken any law. He then said that it was a policy from above that if I didn't write anything promising not to practice Falun Gong in the future, they would not extend my passport. In the end, he returned the passport to me without extension and took away the receipt as well. 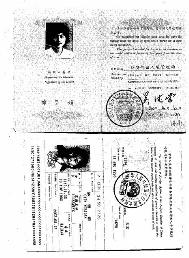 I am a Chinese citizen and have never done anything that harms the country or the interests of the country. I have never broken any laws, either. All I have done was appeal to the Chinese government to stop the persecution of Falun Gong based on my sense of justice and conscience, because the persecution has been founded on lies. It has wasted a great amount of national resources, manpower and financial resources to crackdown on law-abiding citizens who follow the principles of Truthfulness-Compassion-Forbearance. In China, hundreds of thousands of practitioners have been arrested, detained and tortured, and thousands of Falun Gong practitioners have been killed. This is against the constitution, and it is a disaster for the Chinese people. This is truly what has harmed the interests of our country and tarnished the image of our country.

The Consulate Department of the Chinese Embassy in Japan refused to renew my passport without any law or regulations to justify it. This is extremely bad conduct that violates the constitution and the basic human rights of a citizen. It is a form of persecution against overseas Falun Gong practitioners.