Spain: The Most Circulated Free Newspaper Reports on the Five-Year Persecution of Falun Gong

(Clearwisdom.net) On July 23, 2004, the most circulated free newspaper in Spain, 20 Minutos, published an article of a special news analyst, which talked about Falun Gong and the five-year-long persecution by Jiang Zemin's regime. The content of the article is as follows: 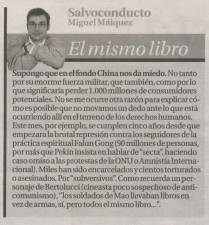 I suppose that deep down inside we fear China. No so much because of its enormous military might, but also for what it would mean to loose 1 billion potential consumers. I can't think of any other reason to explain how it can be possible that we don't move a finger when faced with what is happening over there in the matter of human rights. This month, for example, marks the fifth year since the brutal repression of followers of the Falun Gong spiritual practice began (involving 90 million people, regardless of how much Beijing insists on talking about "sect", ignoring protests from the UN and Amnesty International). Thousands have been jailed, and hundreds tortured and murdered. All for being "subversive". This is very reminiscent of one of Bertolucci's characters (a filmmaker who few would suspect of being anticommunist), "Mao's soldiers carried books instead of weapons, yes, but everyone with the same book ..."