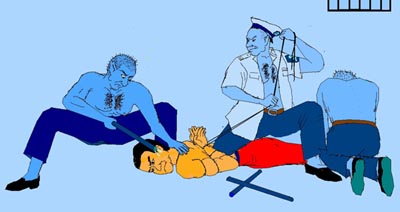 Illustration 1. This happened inside the Xinhua Labor Camp in Mianyang City, Sichuan Province. This torture method is called "tying the ropes." It is often used by the guards there. They strip practitioners of their' upper body clothing. Then they take a rope the circumference of a small finger and tie the rope tightly around the practitioner's arms, making the rope cut into the skin. They put the practitioners' arms behind their backs and raise their hands. This causes extreme, unbearable pain. According to the official camp "rules," such torture cannot be used beyond 15 minutes, otherwise both arms will be disabled. After the rope is removed, almost every place the rope had come in contact with has an open, bleeding wound. The arms have lost feeling. It takes weeks to recover from such gross mistreatment; some people take two to three months to recover. Others, who were tortured more severely, are permanently disabled. In general, when the jail guards "tie the ropes", they also use several high voltage electric batons, some carrying 300,000 volts, to shock a practitioner's head, cheek, neck, heart, back, armpits, sciatic nerve and other places. The extreme pain, coupled with the agony from the high voltage electric shocks often make people lose control of their bowel and bladder. 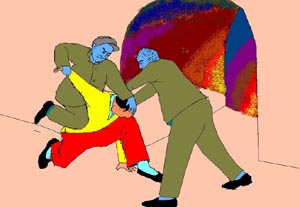 Illustration 2. One day in May 2002, people from Team No.4 from Division No.4, ' guards He Yuan and He Licheng instigated two drug addicts who had been assigned as monitors to torture Chengdu City practitioner Deng Jiangang (over 60 years old). Outside the Team No. 4 jail building, they attempted to force Dafa practitioner Mr. Deng Jiangang to repeatedly stand up and squat down. Deng refused. The two monitors pushed and squashed Deng's back area and broke four of Mr. Deng's ribs. When questioned about the fractures, the two "monitors" pretended that they knew nothing about it. The next day Mr. Deng was in severe pain and was sent to the Mianyang City Hospital. The team concealed the information inside the labor camp. After the other practitioners heard about the event, they demanded to have the criminals punished. The guards, however, just said the monitors made a mistake, and it had nothing to do with the guards. Their so-called "punishment" for the two monitors was to transfer them to another team. 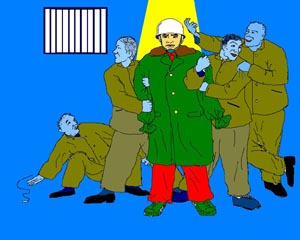 Illustration 3. On November 30, 2002, the labor camp authorities started brainwashing the practitioners. They gathered more than ten of the worst guards from each team as well as more than 90 of the worst drug addicts/monitors to begin brainwashing more than thirty practitioners in Team No. 5, Division No. 4. They did not allow practitioners to talk; forced them to stand for a long period of time; didn't allow them to sleep or use the restroom; locked them inside small cages; tied them with the torture called "tying the ropes," and shocked them with electric batons in attempts to get them to give up their belief in Falun Dafa.

The picture is of practitioner Zheng Fangjun from Suining City who is in his 40's. Because he ripped up ""the labor camp uniform and tore up cartoons that ""slander Dafa, the guards organized eight inmates to monitor him around the clock. They put a metal helmet on his head to prevent him from banging into the wall. They tied up sleeves on the garment to prevent his hands from coming through, and tortured him many times with "tying the rope" and high voltage electric shocks. 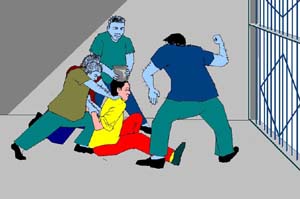 Illustration 4. One afternoon in February 2001, an individual named Yang, head of Team No. 4, in his 50's, arrived at after he had been drinking. He came up with some excuse to beat practitioner Song Ziming, in his 50's, from Kai County, Sichuan Province. Practitioner Mr. Song Ziming's cheek, lips and nose were swollen and bleeding. Yang then called drug addicts to drag Mr. Song Ziming to the corridor's metal gate, put a spittoon on top of Song's head and they hit Song's chest with their fists. The other practitioners heard the noise, and indignantly condemned Yang's vicious act. Yang declared that he wanted to drag Mr. Song Ziming to the riot group to kill him, and shouted that he would come back in the evening to keep torturing him. The other guards in Team No. 4 were afraid things would get out of hand and locked the metal gate. Yang then left. Later, the practitioners protested the brutal acts with a group hunger strike and demanded punishment for the criminals. After they had been on a hunger strike for four days, the guards came and apologized. Later, Yang was removed from this post. In fact, he was merely transferred to another job. The change was merely a formality to soothe people's feelings.'