Thoughts About a Picture Taken on Wall Street (Photo) 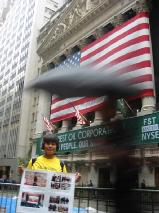 The above photo was taken around noon on August 16, 2004, while we were at the New York Stock Exchange on Wall Street clarifying the truth to people. In the photo, on the left-hand-side of the Falun Gong practitioner holding a poster in her hands, a column of black gas emits from the ground and forms an umbrella-shape cover.

Thoughts regarding this photo are summarized below:

1. The evil factors in other dimensions are gathered at the American financial center, Wall Street, and are attempting to prevent Falun Dafa practitioners from clarifying the truth. In this situation they were unable to manipulate people to stop practitioners from clarifying the truth, and they personally went into action and had their traces disclosed.

2. The evil is right around us. However, one righteous thought can subdue all evils. Although the column of black gas and the umbrella-shape cover were very close to the practitioner in the photo, they were unable to touch the practitioner. What this practitioner had in her heart at that moment was the desire to let more people learn about the persecution and killing launched by Jiang against Falun Gong practitioners. Let more people come to stop it and help more people to better position themselves.

The reflection of evil that can be captured by camera is in a dimension that is closest to the one visible to us. There are countless dimensions in the three realms. In the immeasurable dimensions that are invisible to us, we are unable to see the evil's manifestations or the breath-taking battle of righteousness subduing the evil. As long as we resolutely follow what Teacher tells us, to do the three things, all will be fulfilled in the process.

"When an evil-minded person is thinking of something bad, this person might change his mind due to the powerful effect of your field; he might then no longer want to commit the wrongdoing. Perhaps a person wants to swear at someone. Suddenly, he may change his mind and will not want to swear. Only the energy field from cultivation practice in a righteous way can produce this effect. Therefore, in the past there was this saying in Buddhism: 'The Buddha-light illuminates everywhere and rectifies all abnormalities.' This is what it means." (Zhuan Falun)

On August 16, when we had just arrived on Wall Street, we met a tourist group from China. At first when we handed the Chinese version of truth-clarifying literature to them, they dared not accept the flyers. When the group leader wasn't paying attention, a young man took one set of materials. Then several people came to ask for the literature. It was a pity that at that time we had only about six sets of materials and did not have enough for all people who wanted them. When the tour leader saw that materials were being handed out, he said, "Don't take it!" But they still took the materials. The people quickly put the flyers into their pockets. One young lady asked a practitioner if she could take a picture of her. When the practitioner replied, "Of course, yes!" the lady took a photo of the practitioner, who wore a shirt imprinted with words of Falun Dafa, even though the leader shouted, "Don't take the picture! Don't!" A Falun Gong practitioner told the leader, "This is the U.S., where people enjoy human rights." The leader then stopped talking.

4. Sending forth righteous thoughts is as important as distributing flyers and clarifying the truth. I remember on August 16, when we had just arrived at Wall Street, people were very indifferent. Few took the truth-clarifying materials. At the beginning, we had a thought, "Let's go to Water Street. Although there were fewer passersby there, more people had accepted the flyers. There are more people here on Wall Street, but fewer accept the materials." Although at that moment, we did not see the column of black gas or the umbrella-shaped cover, we immediately realized that we should not leave. The field here needed to be cleared. Later, a practitioner found a spot which was a bit higher than the surroundings, and played the exercise music and started doing the sitting meditation. After practicing the meditation for one hour, she saw that the materials were being distributed much more quickly. At that point, a practitioner from Washington DC who speaks very good English also arrived. The practitioner continuously answered people's questions, and the flyers were quickly distributed. Feeling so good about it, she once again sat down with her legs crossed and played the music "Pu Du" and "Ji Shi," composed by practitioners. At that moment, some people came over to carefully read the truth-clarifying posters. Some people asked her what she was practicing and where they could learn it. When they obtained the information, they were very happy and sincerely said, "Thank you! Thank you!" We understand that wherever there is a practitioner, the evil factors are eliminated and people become awakened. Since overseas evil factors have gathered in New York, practitioners who are able to arrange it should try their best to go to New York and bring Dafa practitioners' field of righteous thoughts there.

The above is my personal understanding. Please point out if there is anything inappropriate. Thank you!

“Hong Kong: A Good Place to Learn the Truth about Falun Gong (Photos)”