) Intentional Suffocation is one of the torture techniques used in interrogation and torture rooms, forced labor camps, and brainwashing classes of the public security system in China. It is commonly used on Falun Gong practitioners who refuse to give up their belief.

The police put a plastic bag over the Falun Gong practitioner's head so that he or she cannot breathe. Then they kick and beat the person while shocking him or her with electric batons. This torture technique is extremely cruel, and the victims tortured in this way can easily die from suffocation. 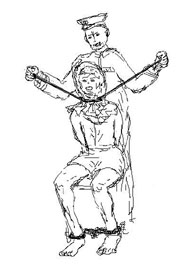 “Oppose the Persecution Prior to Being Persecuted”