: Falun Gong is a traditional form of Qigong, the ancient practice of refining the body and mind through exercises and meditation, and is adapted for the busy lives of modern people; and

: The inculcation of virtuous moral standards, as taught in Falun Gong, benefits society and promotes an honest, kind and tolerant concern for others; and

: Falun Gong, the most popular form of Qigong in Chinese history, has been practiced in Melbourne for five years and is taught free of charge in Wells Park; and

: The practice of Falun Gong has enabled millions of people worldwide to deal with stress and anxiety by upgrading their morality and improving their physical and mental well being with tranquil exercises; and

: Anyone is welcome to learn Falun Gong because its core principles of "Truth, Compassion, and Forbearance" transcend cultural, social, economic and national boundaries; and

: The City of Melbourne welcomes Mr. Yu Wang, who escaped the persecution of Falun Gong in China and was granted asylum in the United States of America

Now, Therefore, Be It Resolved That

I, John A. Buckley, Mayor of the City of Melbourne, Brevard County, Florida, do hereby proclaim the week of July 18-24, 2004 as

in the City of Melbourne and encourage citizens to become aware of this ancient practice that studies the universal principles of truthfulness, benevolence and tolerance. 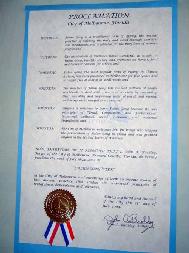