My name is Ling Chunwang. I am 72 years old. My wife's name is Luo Runxiu, and she is 66 years old. I used to own an auto repair shop in China in the late 1980s, which I made a good profit from. But this profit also gave me a lot of trouble. Later on, as I was getting older, I handed over the management of the business to my nephew. However, he made off with all the money and even took my savings and fled, leaving me in great debt. My health worsened as a result of anger and indignation. I developed heart disease in 1996. I took a lot of medication but none of them helped. I lived on the third floor, and it would take me half an hour to climb up the stairs. Just halfway up the stairs, I would have to pause and lean against a wall breathing heavily with sweat running down my face. Climbing those stairs was extremely painful. My wife deepened her resentment towards me because of this matter, believing that I trusted someone outside the family more than our own son. In addition, she couldn't tolerate my bad temper, so she separated from me.

In mid-1996, our oldest son, who lived in Australia, invited us to come live with him. Because I was worried about my health condition, I asked my wife to go first. She was so fortunate to attend Teacher's lecture in Sydney, and started to learn and practice Falun Gong immediately. She related to me how one day when she was doing the sitting meditation on the balcony, she felt that all the indignation in her chest was taken away just like a heavy object being lifted. She became so much happier and her health condition greatly improved. Three months later, carrying a load of medication weighing more than twenty pounds, I flew to Australia. After hearing about the wonderfulness of Falun Gong, I decided to give it a try. As soon as I started practicing, I easily quit my dozens-of-years of habits of smoking and drinking. One day, my son accompanied us on a hike in the Nanshan Mountains. I found I was much more energetic than before, and I didn't even have difficulty breathing. After I got home, I threw away that huge load of medicine. After years of medication, my heart condition had not improved; but only two months after practicing Falun Gong, it was healed.

To make sure we could keep our minds on practicing Falun Gong in Australia, our daughter-in-law helped us to process our Bridging Visa. Towards the end of July 2001 we went to the Chinese Consulate in Sydney to renew our passports, because our passports' expiration date was August 18, 2001. The clerk told us to come back and pick up our passports three days later. But three days later when we did as we were told and went back to the consulate, instead of handing us our passports, a consul took us to a meeting room on the second floor. He asked us if we practiced Falun Gong, and wanted to know why we had taken part in a peaceful appeal in front of the consulate. We told him about the benefits we had received from practicing Falun Gong, and told him of the brutal persecution against Falun Gong practitioners in China. He said, "You did not witness it. There's no brutal persecution." We told him that Australian citizen Mrs. Dai Zhenzhen's husband was tortured to death by the Chinese police for practicing Falun Gong. He then said, "Now it's illegal to practice Falun Gong in China. As a Chinese citizen, you have to obey Chinese law. We can only renew your passports after you write a statement saying that you will not practice Falun Gong any more and will not protest in front of the consulate in the future." We did not accept these conditions. He then confiscated our passports and told us to leave.

For these past three years, without a passport, we cannot go back China to see our sons. We tried several times to ask for the renewal of our passports, but every time, the Chinese consulate would want us to write the "statement." They did not return our already-expired passports until the end of 2003. In May of this year, the Australian Immigration Bureau wanted us to have a physical checkup, but we had to have a valid passport to do that, so we went to the Chinese consulate again to ask for a renewal. But they still wanted us to write the "statement," otherwise they wouldn't process it for us. Every time we go to the consulate we have to ask our son or daughter-in-law to take one day off of work and drive us there, which has created a lot of inconvenience for them.

At present, similar instances of depriving Chinese citizens of their passport rights simply because they practice Falun Gong, a wonderful practice that improves mental and physical health, have occurred in at least eighteen countries. We appeal to the United Nations and all governments to help us solve this problem and help stop the brutal persecution against Falun Gong practitioners in China. 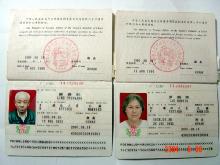