Falun Gong practitioners have been brutally tortured in Chinese detention centers, prisons and labor camps (lao gai) because they refuse to give up their beliefs, and peacefully appeal for their most basic human rights. One of the torture methods is to handcuff and shackle practitioners so that their bodies are forced into painful positions, and then make them move from one cell to another, intentionally inflicting even more humiliation and pain. 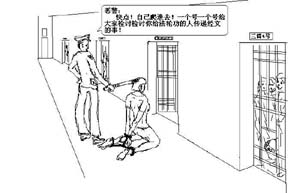 The policeman said to the woman inmate who helped practitioners to pass around Master Li's articles, "crawl into each cell and tell everybody that you were wrong to pass around Falun Gong articles.

When using this method, the police handcuff a practitioner's hands behind their back. The practitioner is forced to kneel down with both feet shackled. At the same time, they connect the handcuffs and ankle shackles in the shortest possible distance so that the practitioner is unable to move into a different position. This causes enormous pain. This method is insulting and humiliating, inflicting psychological abuse on top of the physical abuse.

In the past, this method was only used on male criminals who committed serious offenses. But now, it is used to torture innocent Falun Gong practitioners, even women.

The guards force practitioners to kneel down and move from one cell to another. By using this humiliating method, they attempt to create a negative image of Falun Gong. According to an earlier Clearwisdom.net report, after learning the truth about Falun Gong, one inmate who had been sentenced to one year in prison (a non-practitioner) came to understand that Falun Gong practitioners are innocent and are being persecuted. She helped practitioners to pass around Master Li's articles. After the wardens found out, they used this method to torture her. She was handcuffed and shackled, forced to kneel down and move from cell #1 to #4 and then again from cell #4 to #1. They opened the door of every cell in order to humiliate her. Some criminals shed tears out of sympathy and they were beaten up by police.

One of the torture methods is to bury practitioners alive. 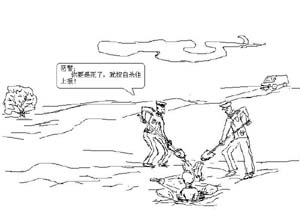 The police said, "If you die, it will be counted as a suicide."

“Reciting "Lunyu" When I Was Detained in the Labor Camp”

“Review of the Facts: Beijing Police Officers Interfered in the Funeral of Zhao Xin and Arrested the Photographers”