During this torture, police tie the victim's legs tightly to the tiger bench using belts. They then put bricks or some other hard objects under the victim's feet. They keep adding layers of bricks until the belts break. Victims endure unbearable pain and often pass out during these torture sessions. 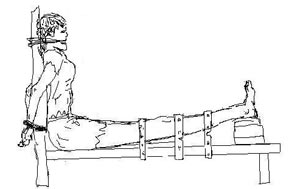 Other tortures are often used on the victim at the same time, including shocking the victim with electric batons, cuffing the hands behind the back, burning the body with cigarettes, inserting wood slivers under the fingernails, stabbing the ribs with a sharp pen, hitting the cheekbones with a screwdriver, slapping the face, pricking thumbtacks into the face, and even reining the mouth with a rope (oftentimes the victim cannot close his mouth since the two corners of the mouth have been torn.)