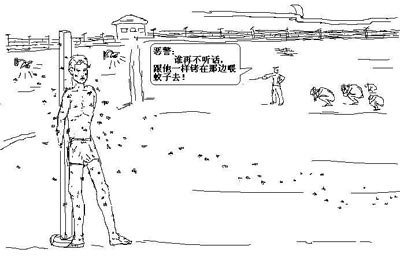 (Caption: Police say, "Whoever does not obey us will be tied up outside as food for the mosquitoes!"

This torture was often used by gangs of bandits in the past to punish captives who violated their rules. Sometimes people even died from being bitten by poisonous insects. Now this torture is used by police in Chinese labor camps to torture innocent people who believe in "Truthfulness-Compassion-Tolerance." 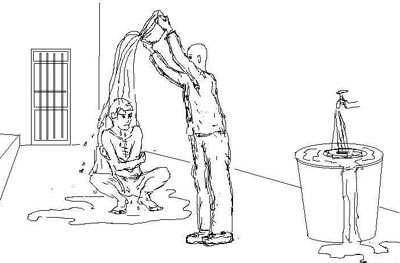 In the freezing cold winter, the police instigate criminals to keep pouring cold water on practitioners, causing them to be frozen, suffer frostbite and numbness. Sometimes part or all of their body would become paralyzed. Some people even suffer loss of speech and memory. 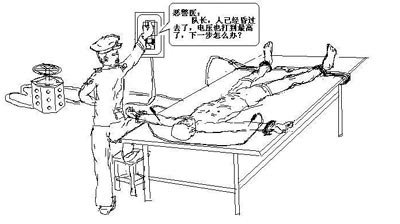 (Caption: the prison doctor says, "Captain, he has passed out. The voltage won't go any higher. What shall I do?")

What is displayed here is called the electric needle. The police can adjust the electric current and voltage at will. If the voltage and current is high, the victim would bounce on the bed from the shock. He would suffer cramps all over his body and incontinence of his bladder and bowels. If the victim has a weak heart, he could easily die on the spot. Many practitioners on hunger strike are repeatedly subjected to such torture.

In order to achieve their goal, sometimes the police employ various means to make practitioners suffer even more. For instance, they shock practitioners with many electric batons simultaneously; they soak practitioners in water and then shock them; or shock sensitive parts of the body, including eyelids, soles of the feet, armpits, neck, etc. After the electric shock, the skin would be badly burnt, develop blisters and even fester. Such torture also causes damage to the internal organs and nervous system. Also, the victim suffers from psychological trauma. 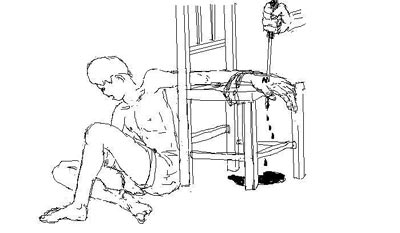 The police use a screwdriver or other sharp object to stab the back of practitioners' hands, attempting to force them to give up their belief in Dafa. The victim will bleed profusely and often pass out due to the excruciating pain.

“Teaching the Fa at the 2004 Chicago Conference”