(Clearwisdom.net) On April 2, 2004, Kansas State Senator Stephen Morris wrote to request the Chinese Consulate in Chicago to return the passports of Falun Gong practitioners Dongmei Wang and Jiyun Kuang. The Senator pointed out that it is not acceptable in the United States of America for the Chinese Consulate to withhold their passports because they continue to practice Falun Gong.

This letter is written in support of your returning passports to the two following individuals: Dongmei Wang, and her husband, Jiyun Kuang

I understand they sent the passports to you in January, along with the needed information and the required fee, to be renewed. Apparently, you assume you can hold their passports because they continue to practice Falun Gong. This is not acceptable in the United States of America. The continuing persecution of innocent people, because of their beliefs, is not tolerated in our civilized society.

Please make every effort to return the renewed passports to Ms. Wang and her husband. I will await you timely response. 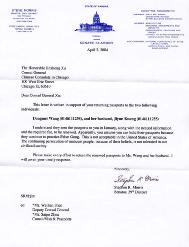