11. According to Falun Gong practitioners who were once incarcerated in Yitong Detention Center in Yitong Manchu Autonomous County, Jilin Province, the staff at Yitong Detention Center forced them to work as slaves without any pay, labor rights, or even human rights, to make a type of handicraft for export referred to as the "Handcrafted Artificial Bird." Everyday they worked extremely long hours and took a severe toll on their health. The incarcerated Falun Gong practitioners were held as slaves to provide free labor beyond their physical limit, and they were also subjected to the disciplinary staff and slave labor supervisors' brutal beatings. Wang Qi from Yitong Manchu Autonomous County's "610 Office" did not deny it when Minghui reporter Chu Tianxing contacted him to confirm the alleged slave labor in the forced labor camps in Yitong County. [The 610 Office is an agency specifically created to persecute Falun Gong, with absolute power over each level of administration in the Party and all other political or judicial systems.]

The "Handcrafted Artificial Bird" is a type of export product. Each bird is made of molded polystyrene in the shape of a bird wrapped with Ricepaperplant Pith (or Medulla Tetrapanacis) glued with bark for the wings and feathers for its tail. The prison inmates at Yitong Detention Center worked as slave labor supervisors at different levels. Falun Gong practitioners illegally detained in Yitong Detention Center did not get any days off given to all detainees. Moreover, they were often forced to work into the night until one to two A.M. In order to increase the production output, the disciplinary staff would even deny Falun Gong practitioners sleep for three to four days. All the revenue from slave labor went into the pockets of the disciplinary and other staff members at Yitong Detention Center.

The disciplinary staff and the slave labor supervisors also made a new type of torture tool called "Giant Wood Planks." Someone at Yitong Detention Center made a ragged verse of black humor to describe the horrible impact of such a torture device: "One lick turns one pale (lack of blood); two licks turns one red (blood); three licks tears flesh." It was fairly common that the disciplinary staff and inmates-turned supervisors tore Falun Gong practitioners' flesh with the appalling flogging with the "Giant Wood Planks" every day. A practitioner with the last name of Bao was once subject to repeated floggings with "Giant Wood Planks" on the hips. The injury was so severe that the practitioner was unable to recover even a month after the flogging.

A government official on the Economics Committee in Yitong Manchu Autonomous County once revealed that several units under the Economics Committee were indeed responsible for the production contract of "Handcrafted Artificial Birds." It is "normal" for the detention centers and forced labor camps to bid contracts at an extremely low price from the local manufacturing plants and then force detainees to provide slave labor to complete the contracts. Commercial production using incarcerated Falun Gong practitioners as slaves is the very reason why the detention centers and forced labor camps can afford to bid so low on commercial contracts and still make a profit.

12. Xin'an Forced Labor Camp in Beijing and Mickey Toy Co. Ltd. in Beijing once cooperated to profit from a toy bunny contract, where they enslaved incarcerated Falun Gong practitioners to make toy bunnies for the Nestle Company. 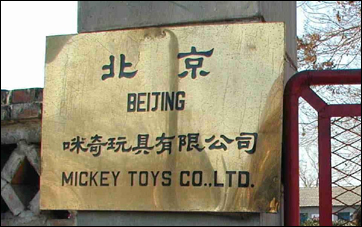 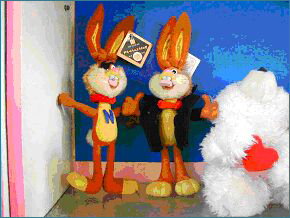 13. The No. 1 Female Forced Labor Camp in Shandong Province became the production plant [using slave labor] for the Lider General Corporation Ltd. in Shandong Province and Tianyi Printing Company Ltd. in Jinan, Shandong Province. Incarcerated Falun Gong practitioners were forced to process and sew quilts for Lider General Corporation Ltd. and to put name-brand labels on the quilts such as "Beijing Jiangyaling" and "Shuanghe" for Tianyi Printing Company Ltd. The quilts are exported to more than ten countries, including the United States, Canada, Chili, the EU, Japan, South Korea, Singapore and other countries.

Slave labor in China violates the Chinese Constitution, as well as the following Chinese Laws:

Citizens of the People's Republic of China have the right as well as the duty to work. Using various channels, the state creates conditions for employment, strengthens labour protection, improves working conditions and, on the basis of expanded production, increases remuneration for work and social benefits. Work is the glorious duty of every able-bodied citizen. All working people in state enterprises and in urban and rural economic collectives should perform their tasks with an attitude consonant with their status as masters of the country. The state promotes socialist labour emulation, and commends and rewards model and advanced workers. The state encourages citizens to take part in voluntary labour. The state provides necessary vocational training to citizens before they are employed.

Working people in the People's Republic of China have the right to rest. The state expands facilities for rest and recuperation of working people, and prescribes working hours and vacations for workers and staff.

According to [human rights] observers, the enslaved labor in the forced labor camps, detention centers, and prisons in China violates Chinese Laws, as well as the United Nation's Universal Declaration of Human Rights. Article 4 of the Universal Declaration of Human Rights states, "No one shall be held in slavery or servitude; slavery and the slave trade shall be prohibited in all their forms."

According to a Taiwan Central New Agency report on May 11, 2002, although Section 307 of the Tariff Act of 1930 (10 U.S.C.  1307) prohibits the importing of goods made by prisoners into the United States, U.S. officials has not appropriately or effectively executed this law or denied import of prison labor products to the United States.

According to the Congressional-Executive Commission On China's 2002 Annual Report, "The United States and China signed a Memorandum of Understanding in 1992 to prevent import into the United States of products made using Chinese prison labor. A subsequent agreement in 1994 permitted U.S. officials, with Chinese government permission, to visit prison facilities suspected of producing goods for export to the United States." [1] U.S. officials have made 13 requests for site visits since 1996, but they have been permitted to conduct only 3 site visits in China.

The Congressional-Executive Commission On China recommended, "The US government encourages companies to adopt and follow a progressive code of conduct. The Secretary of Commerce, OPIC, and the Export Import Bank should be directed to give preference to companies that have a strong code of conduct and prove they have been following it in their business practices." [1]

According to the Congressional-Executive Commission On China's 2002 Annual Report, "The United States-China Relations Act of 2000 created a Prison Labor Task Force to monitor and promote effective enforcement of U.S. law in this area. Its first annual report to Congress stated, ''We believe that prison officials frequently provide prison labor to private, quasi-government, or government-owned manufacturing facilities to perform manufacturing and assembly work, and that the remuneration prisons receive for prisoners' services give prison officials no incentive to cooperate in preventing the export to the United States of goods made with prison labor.'' Overall, Chinese cooperation in implementing these understandings has been minimal." [1]

Founded in January 2003 "to investigate the criminal conduct of all institutions, organizations, and individuals involved in the persecution of Falun Gong" [2], the World Organization to Investigate the Persecution of Falun Gong (WOIPFG) pointed out in an investigation report, "The forced labor system not only violates the basic human rights of the detainees, but also encourages the prison and labor camp systems to persecute the detainees because of the huge profit in products made by forced labor. In addition, it shakes the stability of international labor and trade market when these cheap products are dumped on the international market." [3]

[1] "Labor Rights and Working Conditions" in Chapter 2: Commission Activities in 2002: Issues and Recommendations of Congressional-Executive Commission on China Annual Report for 2002