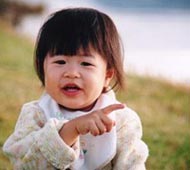 My name is little Fadu

Fadu: Hello little friends, my name is little Fadu. Before I was born, my daddy told my mommy, "No matter whether the baby is a boy or a girl, the baby comes for Dafa [the Great Law]. Dafa will save him or her. Let's call the baby 'Fadu' [It means "The Law Saves]. I like the name 'Fadu' very much!" (sound of laughing)

Fadu: Mommy told me, I used to have a happy family: grandpa, father, mother and me. They all loved me very much. See, daddy raised me so high. (Laughing)

(Scene): Daddy, where are you? (Music: female solo "Little Fadu wants her father")

Fadu: As soon as I began to learn speaking, I called for daddy. But, (pause), but, dad, where are you dad?

(Fadu listens to the story about her father)

(Scene): Fadu is looking for dad (music: Little Fadu wants her father), Dafa practitioners were arrested on Tiananmen Square. A corner of the image shows the mother and Fadu.

Mom: You can follow mom to travel around the world to tell the truth of how Jiang Zemin murdered your father to the people of the world. Let us ask them to help us to save those little friends' father and mother. Will you come?

(Scene): Fadu and mother traveled to many countries (Pudu music)

Fadu: I follow mom to many countries to tell the truth. Many people heard mom's story about our family. I also learned a lot of stories about my father, grandpa and my aunt.

Fadu: Father's name is Chen Chengyong. Because he spoke out for Falun Gong to the government, he was beaten to death. I was only nine months old at that time. My aunt went to see the body and so she was arrested since she also practiced Falun Gong. She was sent to a forced labor camp.

(Scene): Fadu listens to her mother telling the story about her grandfather (music "Little Fadu wants her father" and Pudu)

Fadu: Grandpa was very sick, but he practiced Falun Gong and became healthy again. After grandpa heard that my father was killed and that my aunt was sent to a forced labor camp, he felt it was so unfair and he died because he was so sad.

(Scene): The newspapers tell the story about my family (music Little Fadu wants her father)

Fadu: Many newspapers in different countries told the story about my family. Mom said that my dad loved me so much, but he never heard his daughter call for him. I kept on calling him, dad, dad, but dad, can you hear little Fadu's calling?

Fadu continues her father's mission to tell the truth

Fadu: Mom told me to carry on father's mission, study the Fa, do exercises, follow Master's words, and be a good little practitioner.

Fadu: In two years, I followed mom to 37 countries. Mom sold all of our furniture to travel around the world, asking for help to end the persecution. Little Fadu not only joins the parade and gives truth flyers to kindhearted people, but also holds a picture of her father at the Chinese Embassy in Switzerland and raises "Truthfulness-Compassion-Forbearance" banner in a peaceful appeal.

Mom: Ayong [nickname for her husband Chengyong], you must be proud of Fadu's outstanding performance. She is a genuine little practitioner.

Fadu: In the past year, little Fadu and mother went to many countries to sue the big evil Jiang Zemin and his followers. We also had symbolic trials for their persecution of Falun Gong.

(Scene): "Petal of peace" spread to the world

Fadu: Touched by the story about mom and me touring the world, Australia started a program called "Petals of peace" that helps more people to bring a "petal of peace" to the world.

Fadu: Uncles, Aunts, grandpas, grandmas, please lend your hands to help. So that thousands of little friends like Fadu will not lose their parents, please help to end this persecution. Fadu thanks you!

“California: Falun Gong Practitioners Participate in Earth Day Event at the University of California in Sacramento”