Office of The Mayor
City of Florissant

: The Citizens of Florissant, Missouri always welcome the opportunity to recognize organizations which have proven to be of tremendous benefit to their participants and to the surrounding communities and neighborhoods in which they operate; and

: Falun Dafa, which is also known as Falun Gong, has earned distinction as a self-improvement practice with deep roots into the culture of ancient China; and

: Falun Dafa, consisting of five gentle exercises and meditation, emphasize the life-changing principles of Truthfulness, Compassion and Forbearance for practitioners who are seeking significant positive efforts for stress relief and overall mental and physical health; and

: Although it is undergoing brutal repression in its native China, Falun Dafa has gained more than 100 million followers in sixty countries around the world in the past decade.

, I, Robert G. Lowery, Sr., Mayor of the City of Florissant, Missouri, do hereby proclaim the month of May, 2004, as Falun Dafa Month in the City of Florissant and applaud the self-improvement and non-violent practice of Falun Dafa and to convey to its many participants best wishes as they continue to point out the need to enlighten people in ways to treasure their lives and to cultivate themselves in positive ways.

In Witness Whereof I hereunto set my hand and cause to be affixed the Seal of the City of Florissant, Missouri, the 28th day of April, 2004. 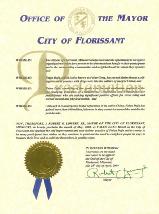