At 10am on April 9, 2004, Pennsylvania Senator Arlen Specter gave a speech on a variety of subjects at a Town Meeting in the Student Faculty Center at Temple University. About one hundred people attended. In the question and answer session, Senator Specter said that we must do our best to pressure the Chinese government to respect human rights 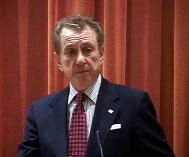 An audience member asked him, "The United Nations Commission on Human Rights will put to a vote a motion by the United States that criticizes China's human rights violations. What is your opinion about human rights in China?"

Senator said, "I have a shocking story about China's human rights. A few years ago, a librarian in Pennsylvania was imprisoned for seven months in China. I initiated a motion to condemn what the Chinese government had done and requested a response from the Ambassador of China. I went to the Chinese Embassy one morning, without knowing that the librarian would be released on the same day. The Chinese Ambassador gave me a lesson before the librarian was released. He said, 'Mr. Senator, we don't like to see you interfere with China's internal affairs.' I said, "You threw a Pennsylvanian in prison without any formal legal proceeding or lawyer's involvement."

Senator Specter emphasized that there was no doubt that what the Chinese government is doing by persecuting and discriminating against certain religions and beliefs is problematic. As early as 1997, the American government has moved to apply sanctions on countries that infringe upon and discriminate against people's spiritual beliefs.

An audience member passed a letter to the Senator, asking for his attention to the persecution of Falun Gong practitioners in China. More than nine hundred people have died in this persecution. Her friend's sister, Qiu Yanyan, had been illegally detained for practicing Falun Gong. Senator Specter said, "This question concerns her friend who was sent to a forced labor camp for two years and a half for no reason. It is a pity that things like this always happen in China. We have been strongly condemning it and will continue our efforts on a larger scale to influence the Chinese government's behavior."

When Senator Specter headed out, another Falun Gong practitioner talked to him about the motion on China's human rights at the United Nations Commission on Human Rights meeting and hoped he would try to call for an end to the persecution of Falun Gong practitioners in the motion. The Senator asked his legal assistant, Mr. William Reynolds to help with it. Mr. Reynolds said he would contact the State Department about it.