(Clearwisdom.net, April 13, 2004) Falun Gong practitioner Ms. Mao came from Missouri to participate in this New York Chinatown parade. She told a Clearwisdom.net reporter, "I saw many Chinese initially were reluctant or fearful to accept Falun Gong fliers. A restaurant owner was presented with a flier. He took it and then gave it to his Mexican employee right away. However, when the float containing real people modeling the torture methods arrived, people were shocked and their hearts were deeply touched, many of them couldn't help extend their hands to take fliers from practitioners' hands.

As shown in the photo above, from July, 1999 to April 10, 2004, at least 936 Falun Gong practitioners have been persecuted to death. The death cases spread among more than 30 provinces, autonomous regions and municipalities directly under the jurisdiction of the Central Government. According to news from Clearwisdom.net, up to April 12, 2004, the number of death cases follows the following order: Heilongjiang, Jilin, Shandong, Liaoning, Hebei, Hubei and Sichuan. Among the people who have been persecuted to death, women consist of about 48%, elders from 50 to 70 years-old consist of about 26.5%.

As illustrated in the photo above, forcing Falun Gong practitioners to give up Falun Gong using tortures such as long-time cuffed and hung up and tiger bench.

As illustrated in the photo above, torture methods such as extended forced sitting on the tiger bench, high voltage electric baton shocking, hung up and beating are often used to coerce practitioners to give up their belief in Falun Gong.

In the photo above, Ms. Chen is demonstrating a torture method. She is from Mainland China and is a musician. She worked in the famous Central Symphony Orchestra of China for 33 years till she retired. After the persecution was launched by Jiang Zemin in 1999, she was arrested for appealing to the central government for Falun Gong.

Her son Chen Gang was a logistic manager at Carlsberg Brewery in Beijing. Mrs. Chen said, "At midnight on June 25, 2000, a dozen policemen broke into our home and arrested me and my son without giving any explanation. I was detained for 30 days and my son was sent to the notorious Tuanhe Forced Labor Camp located in a suburb of Beijing, where he experienced the darkest 18 months of his life.

"In order to force my son to give up his belief, the policemen applied many cruel tortures on him. They only allowed him to sleep 2 to 4 hours a day. Once they deprived his sleep for 15 days. Whenever he closed eyes, they would kick him and punch him.

"The policemen also used several high voltage electric batons to shock sensitive places such as head, neck and chest. The skin was burned and his whole body convulsed from the electric shock. His entire body felt like he was burning in a fire or being bitten by poisonous snakes. Once the policeman directed over ten criminal inmates to beat him up until his face was unrecognizeable. After they beat him up, they tied his legs and feet tightly, and his arms were tied behind his back. Then the criminal inmates tied his neck tightly to his legs so that it almost suffocated him. After they tied up him, they shoved him under a wooden bed and had more and more people sit on top to press down his back. He felt his bones nearly crack. After this torture, he couldn't walk for two weeks. Another practitioner Lu Changjun suffered the same torture and he became paralyzed.

"My son experienced this simply because he practiced Falun Gong, an exercise which brought him good health, a happy life, and taught him to be a good person. And because he insisted his belief in Truthfulness Compassion Tolerance."

These pictures show another torture device known as a "Small Cell". In a long humiliating punishment, Falun Gong practitioners were locked inside this type of wire cage, both hands are handcuffed to the cage sides, and the cage is so small that one cannot stand up. The police use this high strength physical torture to break practitioners' mind and force them to give up their belief in "Truthfulness Compassion Tolerance".

Left image: Qinghua University graduate Zhao Ming, a graduate student in Ireland, went back to China to appeal for Falun Gong. He was tortured in a forced labor camp.

Right image: Some of the torture devices among the hundred of torture methods.

"Tiananmen Immolation" is a fraud 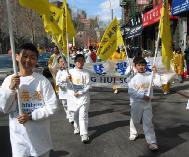