I am a Falun Gong practitioner who was abducted and detained at the Dalian Labor Camp for two years because I distributed truth clarifying pamphlets to local people. I personally witnessed the inhuman tortures that Dafa practitioners suffered there.

At the Dalian Labor Camp, practitioners who refused to sign the so-called "Repentance Statement," "Guarantee Statement," and "Expose and Denounce Statement," [statements renouncing Falun Gong] would be beaten by police until they fell to the ground. Then the police would pour cold water on them from head to toe. This would be followed by shocking them all over their body with five to six electric-shock batons, until the batteries were fully discharged. The police would also incite other inmates to torture Falun Gong practitioners. They said to the inmates: "We don't care what steps you take, your jail terms will be reduced if you can transform any Dafa practitioners." Some inmates would not want to torture Falun Gong practitioners after they learned about the truth of Falun Gong. However, guards Qiao Wei and Wang Jun savagely beat the criminals if they refused.

The guards beat Dafa practitioner Lu Zhengwei until he lost consciousness after he refused to cooperate with their hideous interrogations. Lu's body was covered with wounds, and he was spitting up blood. In order to transform Dafa practitioner Liu Changhai, the guards tied him to a long bench chair for a long time and used all sorts of torture instruments. Seventy two year-old Professor Dong used to work at the Dalian Chemistry and Physics Research Institute of the Chinese Academy of Science located at Xinghaiwan in Dalian City. The deputy camp director Zhang Baolin beat Professor Dong and slapped his face relentlessly in order to force him to sign the "Three Statements."*

On April 11, 2001 guard Wang Jun led some inmates to pour cold water over Dafa practitioner Jiang Junsong's head, and then shock him with six electric batons at the same time. They shocked him on his hands, mouth, ears, and head. His ears, mouth, and face were burned and covered with blisters. Jiang Junsong was carried back to the cell around 4:00 p.m. in the afternoon. His body was covered with wounds and he vomited blood for more than 20 days after. Dafa practitioner Wang Shihong's face was also burned due to electric shock torture. His ears and chin were also covered with blisters. The blisters became running sores full of pus, and later became decaying tissue. Practitioner Zou Benxu was beaten until he lost consciousness. His body was all wet from sweating, and there was blood all over his face and mouth. His thighs and buttocks were covered with black-colored bruises caused by beatings. His thigh muscles were deformed from the beatings. He could not take care of himself and remained bed-ridden for more than a month.

Later, another guard named Li Xuezhong reported to duty. His behavior was more hideous than the others. He would use extremely cruel measures to torture Falun Gong practitioners. In the middle of May 2001 five more Dafa practitioners were abducted and taken to the Dalian Labor Camp, including Li Yong, who was later tortured to death. Li Xuezhong tried many times to force Li Yong to sign the "Repentance Statement." He tortured Li Yong for three days and two nights after Li Yong refused to cooperate with him. After Li Yong was carried back to the cell he could no longer walk and had to remain in bed. Li Yong vomited blood often, and his heart would stop from time to time.

In this human inferno Dafa practitioners would hear miserable screaming every day. They would be awakened at night by shrieks from torture victims. Guards Qiao Wei and Wang Jun led inmates to torture Dafa practitioner Liu Yonglai. They used all sorts of torture tools. In order to stop Liu Yonglai from screaming, they used a belt to seal his mouth before beating him. Later when Liu Yonglai was transferred to the First Brigade, his mouth showed the bleeding slash wound caused by the belt. His face, ears, and limbs were covered with wounds and burn marks caused by the electric shocks. Qiao Wei and Wang Jun even tortured elderly practitioners. They beat 64 year-old Dafa practitioner Wang Enchang until wounds covered his body. Enchang could not sit or lie down at all; he could only lie on the bed face down.

During this long period of time, the guards never stopped torturing Falun Gong practitioners for even one day. On January 14, 2002 Dafa practitioner Wang Qingtian tried to do the Falun Gong exercise because his health was deteriorating due to prolonged solitary confinement. As soon as they found out, the guards ordered inmates to push him onto the bed and then cuffed his four limbs to the corners of the bed. Then the inmates started beating him with clubs, wood planks, and batons.

Guards Luo Xiaochen, Liu Zhongke, and Jing Dianke found Master Li's articles in the pocket of Wang Qingtian. They also noticed that there were practitioners doing the exercises. They started to closely monitor all practitioners in the entire cell block. Even using the restrooms was limited. In order to boycott such persecutions the entire group of Dafa practitioners went on strike and refused to work. Luo Xiaochen then sent practitioners Liu Zhonglin, Guo Qiang, Wang Shudong, Li Yongbin, Zhang Maoyou, Zhu Chengxian, and Li Yongjin, 62, to the closed supervision class. All of them were cuffed to the bed by tying the four limbs to the corners of the bed. Each one had to wear a heavy boxing hat. There was no mattress on the bed; there were only three plywood boards. Some beds had just steel springs underneath. This torture was very hideous (see figure below). A prolonged tie-down with no movement is an extremely painful experience. 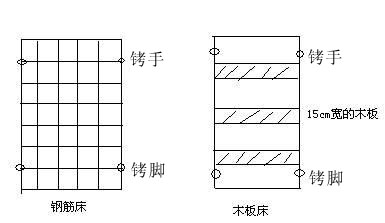 They cuffed Dafa practitioner Li Yongbin to a steel-spring bed near the window. He could not use restroom at all and had to be assisted by inmates. Inmates beat him each time he urinated. They would keep the window open all night long to freeze Yongbin. The outside temperature was very cold at Dalian around March and April. At that time Yongbin was wearing only a shirt, and they took away the blanket and mattress. Yongbin was quivering under the freezing temperature.

Guard Jing Dianke cursed Dafa and Master Li when talking to practitioner Liu Zhonglin. When Liu attempted to stop him from cursing and swearing, this resulted in another round of savage beatings from Jing Dianke. During this period the guards tortured numerous Dafa practitioners. For a Dafa practitioner who was cuffed to the steel spring bed, the shortest time of this torture lasted longer than a month. Li Yongbin was cuffed to that bed for more than 100 days, and Liu Zhonglin was cuffed for more than four months.

This is my true, personal eyewitness account of what I saw at the Dalian Labor Camp from 2000 to 2002. I encourage others who also had first-hand knowledge about the Dalian Labor Camp to continue collecting evidence and expose the crimes committed by the guards in order to help prosecute them under the law when the opportunity presents itself.

* Three Statements: These are documents coerced under extreme pressure, torture and brainwashing, designed by the Chinese authorities to ensure that detained Falun Gong practitioners be thoroughly brainwashed. The statements consist of a letter of repentance, a guarantee to never again practice Falun Gong, and a list containing names and addresses of all family, friends and acquaintances of the detainee who practice Falun Gong. This system was concocted by the "610" office, an agency specifically created to persecute Falun Gong, with absolute power over each level of administration in the Party and all other political and judiciary systems.

“Deepening My Understanding of Sending Forth Righteous Thoughts”

“One Practitioner's Letter Reaches Thousands with the Truth about Falun Dafa”