(Clearwisdom.net, March 14, 2004) In order the raise awareness of the persecution of Falun Gong practitioners in Japan and promote Falun Gong, the Japanese practitioners actively clarify the truth to all circles in Japan, especially human rights organizations. Their persistent efforts have resulted in many people understanding the facts and acting according to their conscience.

A human rights organization's monthly journal entitled Jinkin Times (Human Rights Times) started publishing a series of articles exposing the unprecedented persecution that Falun Gong practitioners have encountered in China, as well as the lawsuits against Jiang Zemin that have been filed in a number of countries. 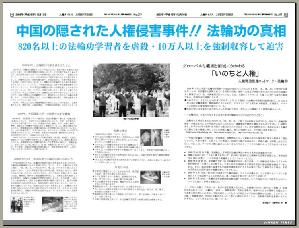 Reports about the persecution of Falun Gong

In its 12th issue last year, this journal published an article entitled, "The Concealed Human Rights Violations in China!! Facts about Falun Gong" with a subtitle of "More than 820 Practitioners Were Killed and Over 100,000 Are Imprisoned". Photos of persecuted practitioners were also provided.

The article gave some background information about Falun Gong before and after the suppression began in China. It also enumerated some basic facts about the persecution that Falun Gong practitioners have suffered in China, as well as the despicable means that Jiang's group have adopted to persecute practitioners. The article also talked in detail about how Falun Gong was warmly received and praised in many countries in the world, as well as the international communities' condemnation of the oppression of Falun Gong.

“From Detention to Being on Trial, Hong Kong Residents' Rights Are Deprived Bit by Bit (Photos)”