Atrocities Committed Against Dafa Practitioners at the Detention Center in Chongzhou City: Doused With Icy Water In the Cold of Winter (Photo)

During the New Year's holiday of 2001, more than eighty practitioners went to Beijing to appeal for Dafa. They were arrested and illegally incarcerated at the Detention Center of Choungzhou City. All of them suffered various types of mental and physical persecution.

Among them, there was a male practitioner who was about 50 years old. He was forced to make about 6,000 firecrackers per day. If he refused to do it or failed to finish his quota, he would be beaten. He was forced to work like that for more than 40 days. The skin of his fingers was rubbed so thin that they cracked, yet he was still forced to make the firecrackers, even with bloody fingers. During the Chinese New Year, Xie Jun and some other prisoners snatched his food away from him and threw it down, forcing him to eat off the floor. As soon as he picked it up, they snatched it away from him again, so he had no food to eat. They also forced him to drink liquid detergent, threatening to beat him if he didn't. Xie Jun and six or seven other people beat and kicked him, covering his chest and back with bruises. For more than ten days he was in so much pain that he was hardly able to speak. 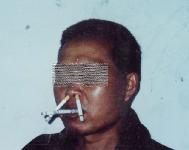 Illustration of Torture: Smoking five cigarettes from both the nose and mouth

One day, Xie Jun and five other people lit some low quality cigarettes. They inserted two of them in the practitioner's nose, and then they put three more in his mouth (as shown above). They forced him to keep smoking. If the cigarettes didn't stay lit, they brutally beat him. Later, they watched as the cigarettes burned his lips. His lips were covered with blood blisters. He smoked until he nearly collapsed and had to lean against the wall in order to remain standing. Xie Jun also incited the other prisoners to slam his head into the wall.

That New Year's Eve, fresh snow had just fallen. Xie Jun and the others stripped the practitioner of all his clothes, and forced him to squat on the ground. They slowly doused him with three basins of cold water, he felt as though he was becoming frozen solid as he crouched there. His clothes and shoes were stolen from him, and later all he could find was one wet shoe.

When he recalled those 40 days, he felt as though he had been tortured almost to death.

Zhang Shuiquan, then director of the detention center, and Ma, the now retired vice director schemed to manipulate the police and prisoners into persecuting practitioners. Liu Zhifen, a female Falun Gong practitioner, was tortured to death at this detention center during the first month of the lunar year in 2001. Zhu Weibing, another young male practitioner, was brutally beaten and force-fed corn porridge, which nearly killed him. Shortly after, the director Zhan Shuiquan took early retirement.