(Clearwisdom.net) In order to try to force Falun Gong practitioners to give up their belief, the Chaoyanggou Forced Labor Camp in Jilin Province has adopted various kinds of inhuman methods to torture practitioners.

"Hanging as an airplane"

"Hanging as an airplane" is a torture method used on practitioners who refuse to renounce Falun Dafa. The practitioner's hands are twisted behind his back and tightly tied. The rope that tied his hands together is hung from the crossbeam of a bunk bed, so that the practitioner's feet can barely touch the ground and all of his weight is on the wrists. His clothes are pulled up to cover his head. The police then use electric batons to shock his armpits, each shock causing a spasm and severe pain. Once a spot on the body is burnt and worn out by the electric shock, they then switch to another place and continue the electric shocks until the practitioner loses consciousness. By the time they are released from the hanging position, many practitioners' arms are broken already. 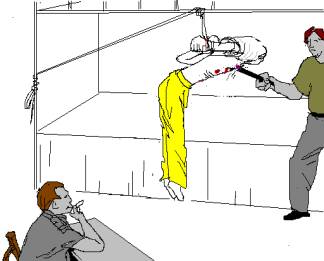