At 8pm on January 28, 2002, I was illegally arrested and abducted by police and the county 610 Office. I was picked up and taken to the police station in Erdao Township, Fengman District, Jilin City, Jilin province, when I was just about 100 meters away from home.

Political instructors Li Jianpin, Xu Zhenfeng, and Xin Dechen strapped me to a Tiger Bench, suspended both my arms, pulled the hood of my jacket over my head, sat on my forehead and tightened the string of my hood. They suffocated me and then used heavy objects to strike my forehead. Within two minutes, I fainted from the torture.

The pain was indescribable. When I woke up, both of my handcuffed wrists had turned purplish-blue, and blood seeped through the skin. Even now, when I do heavy labor, the wrists are numb. The police told us: "Jiang Zemin said killing would be treated as suicide." (Below are the pictures of tortures re-enacted by practitioners according to the description given by the author.) 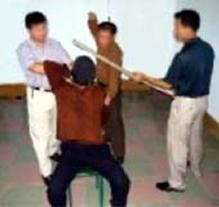 In May 2001, I was forced to work digging cable ducts during my illegal detention at Liaoyuan Labor Camp in Jilin Province. When I was digging a duct in Xinsha River, Changtu County, Liaoning Province, the police used a criminal inmate named Zhang (last name) to cut me four times with a shovel. I fell down with the second blow. My left leg was badly cut and the bone was broken. My pants were slashed and cut into my body, where the flesh had rotted. I fainted. Some of the criminal inmates on the scene were so frightened by this kind of inhuman and vicious torture that they did not dare to watch. Some inmates asked them to stop, and some wept. The prison guards, inmates, and thugs beat me in order to force me to give up my practice of Falun Dafa. They threatened me, saying that if I were beaten to death, they would bury me in a ditch on the spot, because the labor camp had a number of deaths they could have (Re-enactment pictures 3, 4 and 5).

My left eye and head were badly beaten and severely wounded. I still suffer the aftereffects, even now (Re-enactment picture 5). 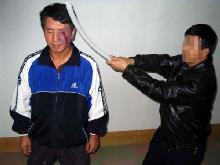