(Clearwisdom.net) The 10th of December was World Human Rights Day. In Helsinki, practitioners went to the busiest street in the city centre to raise awareness about the cruel persecution in China. Widespread human rights abuse has been happening there for the last five years against people who practice Falun Gong, people who follow the principles of truthfulness, compassion and tolerance.

After setting up an anti-torture poster exhibition, hanging up Falun Gong banners, displaying photos of some of the practitioners who have lost their lives in this persecution and preparing some petition forms, some practitioners began to demonstrate the Falun Gong exercises whilst others distributed leaflets and talked to passersby.

Signing the petition to oppose the persecution

Learning about the truth 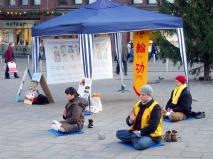 Our torture exhibition posters were always the centre of people's attention and many stopped to read them in detail. Lots of petition signatures were collected calling for an end to the campaign of genocide against Falun Gong in China.

One young Finnish girl was in tears as she read the torture exhibition posters. A lady, who was about to go to China for a holiday, carefully read the posters and then signed the petition.

There were also some Chinese people who passed by. They all received leaflets with a smile. They asked how we afford to pay for all the leaflets and posters. A practitioner answered, "They are all provided from money saved up by practitioners voluntarily because we want more people to know about Falun Gong's beauty and the brutality of this persecution." When the Chinese people heard this, they looked pleased and smiled.