On November 7, 2004, several European Falun Gong practitioners began their journey to Lima, Peru to attend an Experience Sharing Conference and to participate in truth-clarification activities during the Asian-Pacific Economic Cooperation (APEC) meeting in Chile.

Their first stop was Cusco, an ancient town far from the capital. Very few Falun Gong practitioners had been there to introduce Dafa.

The practitioners gave exercise demonstrations and distributed flyers on San Francisco Square in the afternoon. The quiet square became quite busy, as crowds of people came to get flyers, ask for more information about Falun Dafa and ask how they could learn the exercises.

More than two thousand flyers were quickly distributed. The practitioners were very touched to see so many people longing to know about and learn Falun Gong. People were shocked upon learning the facts of the persecution of Falun Gong in China, and that such brutality was still happening in China.

Because of the large number of people who wanted to know about Falun Gong, the practitioners weren't able to talk to everyone personally in the afternoon. A psychology teacher made an appointment and invited the practitioners to introduce Falun Gong to the faculty and students at his institute. 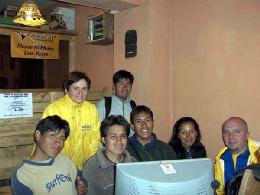 Some people were unwilling to leave after the activity. The Falun Gong practitioners told them about a Falun Dafa website in Spanish so they could learn more about Falun Gong activities around the world and the persecution in China. The kind people in Cusco couldn't understand why Jiang's regime would have launched such a cruel persecution of this great traditional cultivation practice that teaches "Truthfulness-Compassion-Forbearance."