When the Amnesty International Student Club at Centre Wellington District High School (CWDHS) in Fergus, Ontario, Canada heard about the civil lawsuit filed in Superior Court by Falun Gong practitioners against former Chinese dictator Jiang Zemin and four other senior officials, they asked for over 300 postcards urging the Honorable Irwin Cotler, Minister of Justice and Attorney General of Canada, to mount the prosecution of Jiang and the other officials under Canada's Crimes Against Humanity and War Crimes Act. 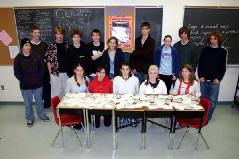 During breaks between classes and lunch hour, club members clarified the facts of the persecution to students at CWDHS and asked students to sign the postcards to support the petition. Within a single day, all of the cards were signed. Comments referencing the persecution such as "Stop this madness!" were commonly seen on the postcards.

After completing their efforts, the Amnesty International Student Club invited a Falun Gong practitioner to visit their group. During the meeting, the club members learned more about the benevolent nature of Falun Gong, and the rapid increase in numbers of practitioners prior to Jiang's ordering the persecution. Asking well informed questions, they learned about the full extent of the persecution, how it is affecting all Chinese citizens, as well as many people overseas. The teacher overseeing the CWDHS Amnesty International Student Club was very pleased with the club's efforts, as well as with the outcome of this meeting. At the end of the meeting, the club requested a demonstration of the Falun Gong exercises.

“New York City: Practitioners Plan to Hold Activities on International Human Rights Day to Call on the UN to Condemn the Persecution (Photos)”