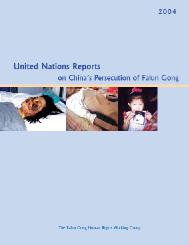 For instance, reports by the UN Special Rapporteur on Extrajudicial, Summary, or Arbitrary Executions stated, "The Special Rapporteur continues to be alarmed by deaths in custody in China. Reports describe harrowing scenes in which detainees, many of whom are followers of the Falun Gong movement, die as a result of severe ill-treatment, neglect or medical attention. The cruelty and brutality of these alleged acts of torture defy description."

Reports by the UN Working Group on Arbitrary Detention provide another piece of evidence, "The detention of Chen Gang, Zhang Wenfu, Wu Xiaohua, Liu Junhua, Zhang Jiuhai and Zhu Xiaofei is arbitrary, being in contravention of articles 18 and 19 of the Universal Declaration of Human Rights, and falls within category II of the categories applicable to the consideration of cases submitted to the Working Group."

"Consequently, the Working Group requests the Government to take the necessary steps to remedy the situation of these persons and to bring it into conformity with the standards and principles set forth in the Universal Declaration of Human Rights, and encourages it to ratify the International Convenant on Civil and Political Rights."

The new book also provides an overall background introduction including the introduction to Falun Gong, its cultural and historic roots as well as its spread in China. It also reviewed the Chinese rulers' escalating hatred toward Falun Gong, the scheme and process of how the authorities made the decision to suppress Falun Gong and the nature of the persecution.

The book also summarizes the torture methods used, including practitioners' demonstrations of the torture they personally experienced. The photos were secreted out of China at tremendous risk.

Falun Gong Human Rights Working Group wishes that this new book will help the public to realize the truth about the terrible persecution. They hope that more people will help to publicize the book and the issue and try their best to help stop this catastrophe, speaking up for those whose voice is suppressed.

“Chile: Practitioners Hold a Series of Truth-Clarification Activities during the 12th APEC Summit in Santiagoe (Photos)”

“Photo Report: Anti-torture Exhibition Continues in Manhattan Despite the Rain - People Are Touched”