(Clearwisdom.net) The following are photos of torture methods re-enacted according to the descriptions of practitioners who experienced them. 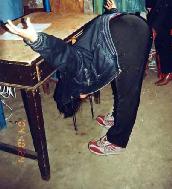 During the Chinese New Year of 2001, Shuangcheng County government officials in Shuangcheng City, Heilongjiang Province organized a brainwashing class for Falun Dafa practitioners. The police warden punished the practitioners who refused to renounce their belief with the "Flying Airplane" torture. The victim is forced to bend his body at a right angle to the legs, and raise his arms behind his back. The guards even pushed the victims' heads under the table. The torture is so painful that the victims' sweat soaked a large area of the cement floor.

“New York: An Eighty-Three-Year-Old Clarifies the Truth and Calls for an End to the Persecution in China (Photos)”