Torture Method Used on Falun Dafa Practitioners in Wanjia Forced Labor Camp, Harbin City: Hung up with Both Hands Cuffed behind the Back (Illustration)

(Clearwisdom.net) The police officers handcuff the Falun Dafa practitioner's hands behind the back and attach a piece of rope to the metal chain connecting the handcuffs. Two police officers then hold the practitioner and use the rope to hang him up onto an iron pipe that is 3 meters off the ground. Thus the practitioner is hung up in the air so that his feet are lifted off the ground, and all his weight is on his shoulders, arms and wrists. His wrists soon became swollen and the handcuffs cut into the flesh so deeply that one can barely see them. Being hung up from the back this way, one suffers extreme pain in the muscles and ligaments. At the same time, the police officers use electric batons to shock the practitioner on his head, face, palms, feet and other sensitive parts. The victim loses consciousness very quickly, and then he is put down on the ground. The police pour cold water on him to wake him up and then hang him up again. His arms feel extreme pain, as if they were being separated from the body. It is hard to describe the degree of pain. Many female Falun Dafa practitioners have also been subjected to this torture. 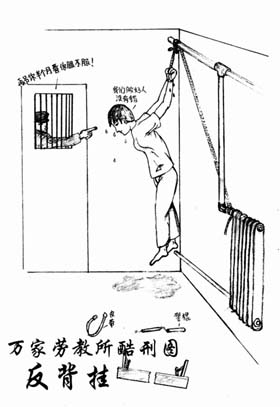 Words on the illustration: Torture method used in Wanjia Forced Labor Camp: Hung up with both hands cuffed behind the back.